Why China won't charge it 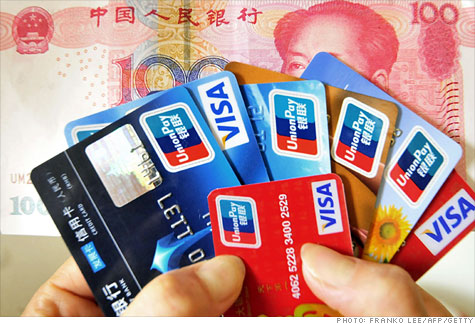 FORTUNE -- At a time when consumers in Europe and the U.S. struggle with huge debts, most major U.S. companies have been flocking to emerging economies for the next big consumer -- namely, in China. It's no surprise. After all, the East Asian tiger surpassed Japan last year to become the world's second-biggest economy after the U.S. And with a population of about 1.3 billion, China is on track to be the world's third-largest consumer market by 2025, according to McKinsey & Company.

Companies aren't just looking to sell to China -- they also want to help facilitate those sales. Electronic payment services such as American Express, MasterCard, and Visa are trying to tap into a country long known as a nation of savers. Their efforts have been met with limited success though, as U.S. trade officials and major credit card companies say that a single Chinese company dominates the industry. But they aren't giving up without a fight.

A U.S. case is pending asking the World Trade Organization to look into trade barriers that discriminate against U.S. credit and debit card companies that want to participate in China's electronic payments market. On Friday, U.S. trade officials requested that the WTO establish a dispute settlement panel to handle the case after consultation with the organization failed to resolve the dispute.

"Opening up China's market, as China committed to do over four years ago, would create American jobs for the U.S. suppliers of electronic payment services, and a more efficient payment card system in China would be beneficial for both merchants and consumers," U.S. Trade Representative Ron Kirk said in a statement Friday. The agency first filed the complaint in September after Visa (V, Fortune 500), American Express (AXP, Fortune 500) and MasterCard (MA, Fortune 500) approached U.S. trade officials over concerns that they were being cut out of the Chinese market.

But in a nation in which consumers are more inclined to save than borrow and spend, is the fight to penetrate the Chinese credit card market really worth it? Certainly the case could help hold China accountable for following WTO rules, which is important when it comes to advancing fair trade.

China UnionPay is currently the country's only national electronic payment network. Created in 2002 by China's central bank, CUP was set up as a national bank card network, representing nearly 200 members and facilitating inter-bank as well as inter-country use of cards. While CUP has partnered with banks including Citibank (C, Fortune 500) and France's Credit Agricole so that CUP cardholders can make withdrawals overseas, its monopoly powers over pricing and services at home has become a sore point for foreign credit card issuers. China doesn't let foreign companies issue cards denominated in its currency. Neither does the country let outside companies build networks to support cards or process transactions.

Nevertheless, credit card usage has surged. Since 2005, credit card issuance to consumers have exploded, with card accounts growing from 11 million in 2004 to an estimated 124 million in 2008, according to McKinsey Global Institute. In a survey conducted in April 2009, 42% of urban consumers said they had a credit card.

But this doesn't mean the credit card business is necessarily lucrative. China is a nation of chronic savers. Households there save about 25% of their discretionary incomes -- about six times the savings rate in the U.S. and three times the rate of even relatively thrifty Japan. Many consumers would rather use savings or even borrow from relatives than use a credit card to buy big-ticket items. They are even less likely to carry balances, according to the survey: Only 6% of all transactions are made with credit cards and outstanding credit-card balances account for less than 0.1% of GDP.

Foreign entrants could try to penetrate China's market all they want, but at least for a while, several factors much bigger than CUP stand in the way of foreign credit card companies getting a piece of China's consumer pie.

For one, credit and debit card companies generally don't get much of a cut from deals struck with local merchants in China. Merchant fees are relatively low and companies will have a hard time convincing locals to raise fees for some time, especially considering it's a country flushed with cash, says Mike Werner, senior equity analyst based in Hong Kong with Sanford C. Bernstein & Co.

What's more, Werner adds, most card holders do not carry over their outstanding balance month-to-month, making interest payments much less profitable. While more people are carrying plastic, it's truly a love-hate relationship with borrowing and spending yuans at home.

For more than a decade, China has relied on investments and exports to drive its economy. Even the highest government officials acknowledge that its huge surplus can't carry the economy. Albeit slowly, officials have focused on spending more on education, healthcare and other social safety nets to make citizens feel more secure about spending more and saving less.

So despite what some analysts say, credit cards aren't much of an answer to stimulate consumption. China expert Nicholas Lardy says households are already sitting on huge amounts of cash -- household deposits stood at 30.8 trillion renminbi, equivalent of about three-quarters of GDP.

What's more, households already have substantial access to credit. Lardy notes loans outstanding to households at the end of 2010 amounted to 30% of GDP and about 50% of household disposable income.

"This is substantially more credit, by either measure, than in other countries at comparable levels of per capita GDP," Lardy says.

So the American Expresses of the world could try to break into the Chinese market, but it already looks pretty crowded -- at least for some time.