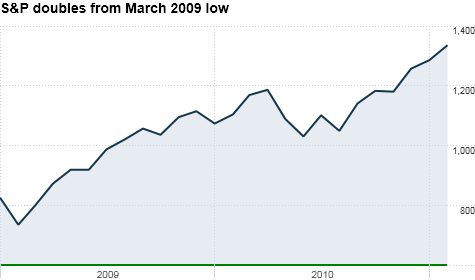 NEW YORK (CNNMoney) -- U.S. stocks finished at the highest level in more than two years Wednesday, propelled by a $20 billion merger in the pharmaceutical sector and a batch of solid corporate earnings.

Family Dollar (FDO, Fortune 500) rallied 9.3% after the discount retailer said it received an unsolicited offer from Nelson Peltz's Trian Group, making it the biggest gainer on the S&P 500.

The Nasdaq (COMP) rose 21 points, or 0.8%, led by a 12% jump in shares of Dell (DELL, Fortune 500), which delivered a stellar fourth-quarter profit. Comcast (CMCSA, Fortune 500) was also a strong performer on the tech-heavy index, with the cable TV provider jumping 4% after reporting better-than-expected quarterly results. The Nasdaq finished at its highest level since November 2007.

Investors were also cheering the latest big M&A deal. French drugmaker Sanofi-aventis agreed to buy Genzyme, a Massachusetts-based biotech company, for $20.1 billion in cash. The deal was announced before the opening bell. Shares of both Sanofi (SNY) and Genzyme (GENZ, Fortune 500) rose more than 1%.

"We've been talking about a pickup in M&A deals, and we expect to see more to take place over the course of the year," said Matt King, chief investment officer at Bell Investment Advisors. "It's a sign that corporate America is more confident about doing business again."

On Tuesday, NYSE Euronext (NYX, Fortune 500) and Germany's Deutsche Boerse said they would tie the knot to create the world's largest exchange.

The filing was not a surprise. Shares of the company have plunged almost 75% in 2011 in anticipation of the news. Borders has been struggling with declining sales since the recession took hold in 2008. It has also been hurt by growing competition from online book sellers.

Economy: A government report showed the number of housing starts rose more than expected in January, while permits for new construction were weaker than forecast.

The government's Producer Price Index, a measure of wholesale inflation, rose 0.8% in January. The increase was slightly larger than expected.

Minutes from the most recent meeting of the Federal Reserve released Wednesday showed that policymakers anticipate a bigger bump in economic growth for 2011 than they thought just a few months ago. But the Fed said the acceleration in growth will mainly be limited to the short term, as growth estimates for 2012 and 2013 were only slightly adjusted.

Currencies and commodities: The dollar fell against the euro and the Japanese yen, but showed strength versus the British pound.

Oil prices spiked Wednesday following reports that Iran was moving warships through the Suez Canal on their way to Syria. Crude futures rose 67 cents, or 0.8%, to settle at $84.99 per barrel.

Bonds: The price on the benchmark 10-year U.S. Treasury was little changed, with the yield at 3.62%