Who got high speed rail money 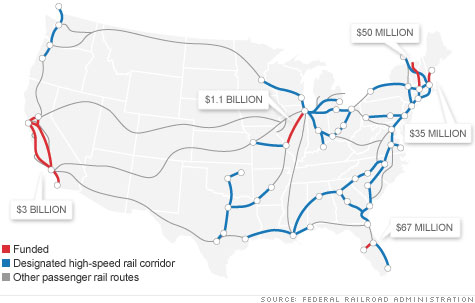 The federal government has already spent $4.5 billion funding projects in California, Florida and Illinois. Will this be wasted if more money doesn't come through? By Steve Hargreaves, senior writerFebruary 17, 2011: 1:42 PM ET

NEW YORK (CNNMoney) -- The federal government already has more than $10 billion in stimulus and other money set aside for high speed rail projects. To date, it has made commitments to spend $4.5 billion of that.

President Obama has made infrastructure a centerpiece of his presidency, calling for $53 billion in additional funds for high speed rail in his budget proposal this week.

Republicans seem unlikely to fund that request, and a political fight is brewing. But if the money is rejected, the $4.5 billion the government has spent so far won't likely be wasted.

Here are some of the major projects to date:

California: The state has captured the lion's share of these funds, winning $3 billion to construct a 220-mph train from San Diego to San Francisco.

The money is to be combined with $9 billion California voters have already approved, plus private funds and additional government cash, to build what is ultimately expected to be a $40-$50 billion dollar project.

Work on the actual line has yet to begin and most of this money has not been spent -- the state is still designing the train, working out the route and getting the necessary permits. The first section of track is expected to run from Bakersfield to Fresno.

California seems intent on building this train with or without help from the federal government, although federal money is a big part of their plan.

Chicago-St. Louis: This route, which passes through Springfield and Bloomington, Ill., received $1.1 billion to make the existing Amtrak service faster.

To do this, improvements are being made that include laying new track, updating signals, building new stations, and buying new railcars and locomotives.

The improvements are expected to boost average speeds from 53 to 63 miles per hour, shaving nearly an hour off what is now a 5-hour and 20-minute trip, according to Ken Orski, publisher of the infrastructure industry publication Innovation NewsBriefs and a former transportation official in the Nixon and Ford administrations.

Those improvements will benefit both the passenger and freight trains that use the line, regardless of whether more high speed rail money is approved by Congress.

Orlando-Tampa: This controversial, 84-mile proposal has received $66 million for preliminary engineering projects on a high-speed train running from the Orlando airport to downtown Tampa. This money does appear to have been wasted.

On Wednesday, Florida Gov. Rick Scott declined the other $2.4 billion being offered by the feds.

For Scott, it wasn't clear just who would want to go from the Orlando airport to Tampa, or why they just wouldn't drive the short distance instead. The fear is that the state will be stuck covering huge operating losses if ticket sales don't pan out as projected.

"This project would be far too costly to taxpayers and I believe the risk far outweighs the benefits", Scott said in a statement.

The fear of being stuck with expensive yearly operating costs is also part of the reason why the federal government has only been able to spend roughly half the $10 billion it has for high-speed rail, said Orski.

The other reason money remains unspent is that negotiations are proving difficult with freight train operators, which own much of the track and aren't keen on ceding space to passenger trains.

Vermont: The state was one of the first to win federal money, and is using $50 million for improvements to existing track.

Maine: The state won a $35 million grant to extend service on a recently reopened passenger line that runs from Portland to Boston -- the only Amtrak service in the state.

The extension would run the line about 30 miles north of Portland to Brunswick, an artsy college town along the coast.

The rest of the money: The remaining funds obligated so far have mostly gone to incremental track improvements or been doled out in $250,000 grants to study the feasibility of high-speed rail service. In all, 32 states have received funding.

Obama's plan is create pockets of high-speed rail in cities in the Northeast, Midwest, Southeast, Texas and on the West Coast. The idea is to reduce airport and road traffic, cut greenhouse gases, and improve travel time.

The network would take decades to build and likely cost hundreds of billions of dollars. Supporters say the $10 billion set aside so far, plus Obama's request for an additional $53 billion, are just the foundation for this project.

But the issue of high-speed rail as a political hot potato seems unlikely to go away, said Emil Frankel, a former transportation expert in the administration of George W. Bush and now director of transportation policy at the Bipartisan Policy Center, a Washington, D.C.-based think tank.

President Obama has made infrastructure a centerpiece of his presidency. This year was the fist time transportation has been mentioned in the State of the Union address in recent memory.

But House Republicans seem disinclined to approve this $53 billion in additional funds, even though it would be spread out over 6 years or more.

There's even been talk of taking back the nearly $6 billion in unspent stimulus money and either using it for deficit reduction or focusing it on the busy Washington-Boston rail corridor, where some analysts say it would make more economic sense.

And every time the president emphasizes infrastructure, it only acts as a lightning rod for Republican criticism.

"I've never seen so much rhetoric get loaded onto a program that is really just a small part of the federal budget," said Frankel.