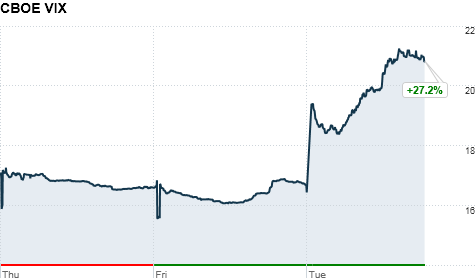 The volatility index hit its highest levels in a month on Tuesday. Click chart for more on the VIX. By Ken Sweet, contributing writerFebruary 22, 2011: 2:58 PM ET

The CBOE volatility index (VIX), or VIX, rose 27.8% to 20.99 in late afternoon trading. The index has jumped more than 31% in five days and is now trading at its highest level since late November.

Investors are clearly getting worried but the fear level is still below 30 -- considered the benchmark sign of investor worry.

At current levels, the VIX is also still way below its peak level of almost 90 hit in October 2008 -- after Lehman Brothers collapsed. And year to date, the index is up only about 18%.

The VIX is used by traders as a gauge for how volatile the stocks and futures markets could be over the next 30 days.

The rise in the VIX comes amid a sharp stock sell off, with the Dow falling as much as 120 points.

The turmoil and chaos in Libya is keeping investors on edge as worries about a disruption in oil supplies sends crude prices sharply higher. Oil prices continued to spike Tuesday.

The VIX hit a session high after Libyan leader Moammar Gadhafi said in an hour-long speech that he would not step down and would die before being removed from office.

The Libyan protests follow what have been mass protests across the Middle East.