Stocks: Worst drop of the year amid Libya turmoil 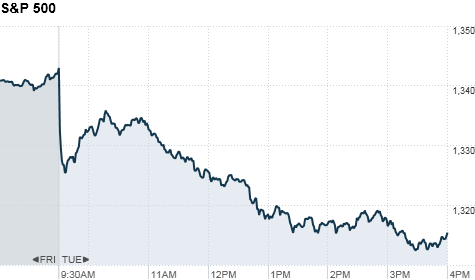 Ongoing weakness in the housing market also added pressure after a report showed that national home prices fell 4.1% during the fourth quarter of 2010.

The Dow Jones industrial average (INDU) sank 178 points, or 1.4%. That was its worst decline since November. Wal-Mart (WMT, Fortune 500) was one of the biggest losers on the Dow, with shares down 3% after the retailer reported disappointing U.S. sales figures.

The CBOE volatility index (VIX), which is known as the VIX and is used to gauge fear in the market,jumped almost 30% Tuesday.

Market strategists seem to agree that the market is due for a short-term pullback given its steady rise since late August, and the spike in oil prices may be the catalyst to trigger that retreat.

Libya and oil: Oil prices spiked 6% Tuesday to settle at $95.42 a barrel as the trouble in Libya entered an eighth day. Earlier, oil prices came within $2 of $100 a barrel.

The turmoil in North Africa and the Middle East has roiled world financial markets, with stocks sinking across Asia and markets in Europe under pressure.

"We're facing a fear of the unknown," said Michael Sheldon, chief market strategist at RDM Financial Group. "Investors don't know how serious the political upheaval will become, or how high oil prices may end up going over the next several weeks."

The political strife in Libya is part of a chain of uprisings that started this year in Tunisia and spread to Egypt, where protesters deposed Hosni Mubarak earlier this month.

Until Libya, the movement in the Middle East had not impacted a major exporter of crude. Now, investors are concerned that the unrest could disrupt the flow of oil from other key producing countries.

Economy: Consumer confidence, as measured by the Conference Board's monthly index, rose to a 3-year high in February.

Shares of Mentor Graphics (MENT) jumped 6.5% after billionaire investor Carl Icahn offered to buy the company for $17 per share, according to a letter obtained by the Wall Street Journal. The stock closed Friday at $14.52 per share.

Shares of Barnes & Noble (BKS, Fortune 500) fell 14.4% after the bookstore suspended its quarterly dividend of 25 cents per share. Barnes & Noble also said it has decided not to issue sales or earnings guidance for the remainder of the year due to the unknown impact of Borders Group's bankruptcy filing.

Currencies and Bonds: The dollar rose against the euro and the British pound, but was weaker versus the Japanese yen.

-- The CNN Wire contributed to this report.