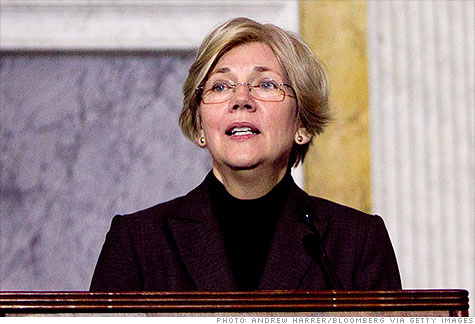 The bureau was the most popular part of the Wall Street reforms passed into law last year. But it was also the most politically controversial, barely emerging after more than a year's worth of legislative wrangling.

The bureau is an independent agency, funded by fees that banks pay to the Federal Reserve. Beginning on July 21, it will be charged with regulating credit cards, mortgages and other financial products like payday loans.

But Republican lawmakers, who've already made good on promises to pass bills to roll back health care reform and undo environmental initiatives, want to take a bite out of the consumer bureau and bring it under their control.

So far this month, they've launched several efforts aimed at the agency.

-- In a bill Republicans passed Saturday to fund government through the end of September, lawmakers slashed the bureau's funding by capping the amount of money it can receive from the Federal Reserve to $80 million. The bureau estimates it needs $143 million this year, and current law allows it to draw as much as $500 million when it's up and running.

-- Rep. Randy Neugebauer, a Texas Republican, filed a bill to move the bureau into Treasury, which would give Congress more of a say in how it operates.

-- A House Financial Services subcommittee has scheduled a hearing on March 16 to discuss oversight of the consumer bureau, including concerns that the bureau could stifle the flow of credit, a spokeswoman for that panel said.

"Providing half a billion dollars a year without any congressional oversight to the bureau is, I believe, a very irresponsible abdication of a constitutional check and balance," said Rep. Jo Anne Emerson, R-Missouri during debate on the budget last week.

Elizabeth Warren, the Obama administration's point person for setting up the consumer bureau, has defended the office against efforts to "chip away at its independence" both publicly and privately.

"Politicizing the funding of bank supervision would be a dangerous precedent," Warren said in a speech to the Consumer's Union last week. "It would deprive the CFPB of the predictable funding it will need to examine large and powerful banks consistently and to provide a level playing field with their nonbank competitors."

Warren, a consumer advocate and Harvard University professor working as an adviser to both the White House and Treasury, has had more than 50 one-on-one meetings with lawmakers about the consumer bureau.

In January, she also met with several high-ranking Republicans who have been critical of the bureau, including Neugebauer, according to Treasury records. She also met with Rep. Shelley Moore Capito of West Virginia, who will chair the March hearing examining oversight of the bureau.

With Democrats still in control of the Senate and the presidency, major changes to the bureau are unlikely for now. But consumer advocates say they're still worried about attacks on the bureau.

"The opponents of the [bureau] in the House have one goal, and it's not to cut the bureau's funding, it's to kill it," said Ed Mierzwinski, national consumer program director at U.S. Public Interest Research Groups.

"What's happened better stay in the House, because their goal is to take the cops off the beat, [the cops] whose job it is to prevent another Wall Street crisis."

Help Desk
Track testing tires to find the best
Find out how TireRack tests and reviews tires and why choosing the right ones for your car is so important. Play
Markets
Data as of 1:10am ET
Data as of 2:44pm ET
Sponsored by
Sponsors
Sections