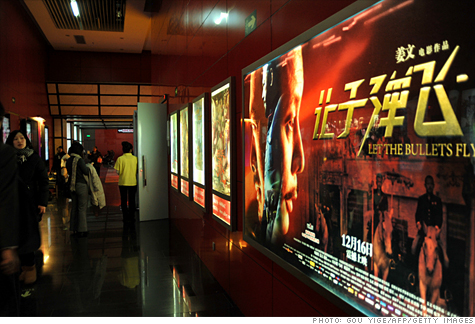 FORTUNE -- It's Hollywood's big weekend, but after the celebrations the industry will return to work on Monday in the same cash-strapped state it was in before the Oscars. Many in the business -- including Christian Bale -- are slowly embracing the fact that China is their new frontier.

The speed at which the Chinese film industry has grown has surprised even the most jubilant of optimists. In 2005, the industry was worth just $250 million, compared to Hollywood's $23 billion. China bulls speculated that its industry might triple by 2010, while naysayers shook their heads. Too much censorship, they said, and not enough artistry. Instead, China's movie business has more than doubled even the most aggressive forecasts -- box office receipts topped $1.5 billion last year, and at its current rate of growth sales could reach $7 billion by 2015.

What the experts seem to have discounted is just how invested the Chinese government is in a vibrant film industry. Movie watching plays a critical role in the development of a consumerist society, something China is working hard to create. Since 2005, the government has invested heavily in infrastructure projects, including new theaters in China's major cities. There are now more than 6,000 screens in the country -- many of them digital -- and the government reports that three new theaters are opening every day.

The content appears to be evolving as well. For most of the last decade, Chinese production houses, nearly all of them backed by China Film Group, the country's most influential state-run filmmaking and film distribution enterprise, produced costume dramas about the history of China that generally followed a very specific political line. In the last two years, more diverse films have emerged, such as Aftershock, an earthquake melodrama, and Let the Bullets Fly, a witty Chinese Western, each made over $100 million in local box office sales.

Even the propaganda films have learned from Hollywood and are evolving artistically -- and selling better as a consequence. In 2009, The Founding of the Republic, China's celebration of Chairman Mao that coincided with the 60th anniversary of the Communist revolution, starred nearly 200 of China's best-known actors, including Kung Fu legends like Jackie Chan and Jet Li, and was widely praised for its artistic integrity. Now, the scent of commercial success seems to be fueling more investment and turning Chinese film industry growth into a self-fulfilling prophecy.

China and Hollywood: A love-hate affair

Like most stories connected to the booming Chinese economy, the rise of China's film industry is far more complex than it might at first seem -- and Hollywood's budding interest in tapping Chinese markets is certainly adding yet another layer of complication.

Historically, China's relationship with Hollywood has been characterized by skepticism and antipathy. For starters, rampant piracy and intellectual property issues in China continue to rub Hollywood the wrong way -- and, much more concretely, cost U.S. filmmakers billions of dollars every year.

There's also the issue of market access and dismal revenue splits. China has historically upheld a quota system granting only twenty U.S. films per year access to Chinese markets -- a far more restrictive regime than those of most countries. Even those films that are granted access to China face major difficulties making profits, due to highly restrictive box-office profit sharing agreements.

Avatar, for instance, made $200 million in China last year, but the proportion of the box-office receipts that went to the studio were between 10-15%. In most other countries, around 50% is standard. And China shows no signs of changing, despite a high profile recent WTO decision declaring that China must give equal treatment to foreigners as it does to domestic companies in its film distribution network. Steve Dickinson, a lawyer specializing in China intellectual property law, urges the U.S. film industry not to get too excited about the ruling: "The American film industry has been trying to find ways to break open the China market for years. This decision doesn't get them anywhere on that issue."

All the same, as Hollywood's profits shrink, China becomes an ever-larger part of the profit equation. China remains a smaller market than Japan or Europe, and the revenue splits may be terrible compared to those in other countries, but China is the fastest-growing market in the world. India, another big market, already has well-developed audience tastes for Bollywood, so it's less of a potential goldmine.

And China has much to gain from Hollywood. Although there is a small group of actors, directors, and producers at the top of the movie business who are extraordinarily successful, talent among screenwriters and directors isn't actively cultivated. And even though more theaters are being built, there are few institutes where actors and directors can study. In a director's class at the Beijing Film Academy, for instance, there are no more than 30 people in class at one time. A production assistant at a Beijing production house says that the scripts he reads are almost universally knock-off derivations of Hollywood blockbuster films or mindless romantic comedies. At least in the near-term, all this significantly limits how quickly China can develop its domestic film industry working on its own.

Riding into the sunset together?

How, then, can China go global -- and how can Hollywood make a buck over there? Creative partnerships appear to be at least part of the solution. Since so few people expect the government to open the market further in the near term, many Hollywood studio bosses seeking entry into the Chinese market are settling for co-production arrangements with Chinese partners. China appears to be content with this status quo -- particularly because it may help them grow their own industry. Given all this, partnerships are proliferating. Mike Medavoy, the producer of the Black Swan, who was born in Shanghai, is working with a Beijing film promoter to help Chinese films go global. Christian Bale recently signed on to be the leading role of a Chinese domestic film.

This kind of collaboration is not without its potential pitfalls. Last year China sent a message to Hollywood filmmakers: if you cross us, we'll make life hard for you. The message went straight to the top. Harvey Weinstein, the famed American producer-mogul, had to shift production for his film Shanghai from Shanghai itself to London and Bangkok after the Chinese government refused to allow Weinstein to film there. Apparently, Weinstein had irked Beijing by buying Chinese movies but not distributing them.

Although Weinstein made flattering public statements about the Chinese film industry when Shanghai was released, it wasn't enough. State-run media published vitriolic remarks about Weinstein from a slew of filmmakers. One of China's biggest directors, Feng Xiaogang, who made Aftershock, publically called Weinstein a "cheater."

These kinds of spats, frankly, help neither country. For China to utilize its domestic film industry to promote business and consumer culture, and for Hollywood to productively participate in this project, a suitable middle-ground must be found in which Chinese film-makers collaborate with and learn from their Western counterparts.

At the end of the day, a movie has to be good for it to sell. One U.S.-educated Chinese banker, an avid filmgoer, puts it eloquently: If the Chinese industry wants to compete on an international level, then Chinese filmmakers should start producing movies about what's important to China. To sell, they must figure out how to package such stories as films, and then show the world.

Can Groupon crack the China puzzle?

Lost in translation? Naming your company in Asia