Libyan extraction: How companies get employees out of global hotspots 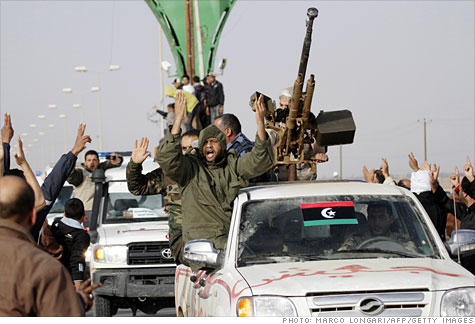 FORTUNE -- It is only natural to assume that the private rescue teams sent in to places like Libya to extract employees of Western companies are made up of ex-Special Forces paladins, rappelling down ropes with knives in their teeth and secretaries slung over their shoulders, making mad dashes through sniper fire across tarmacs to waiting airplanes. But the reality is that, at least in the case of Control Risks Group, only about half of the rescuers are security experts at all. The rest are doctors, nurses, and logistics geeks.

And, as volatile as the situation in Libya has gotten, there has been very little in the way of action-film-style drama. In fact, most rescue situations have been rather dull, which, for companies like Control Risks and Global Rescue, means they have been successful.

"In most cases, we just told people to shelter in place," says Jim Brooks, the British company's president and CEO for the Americas. In other words, they stayed put in hotels, offices, or corporate compounds until they could be safely -- and uneventfully -- shepherded out of the country. And in many cases, not even that much help was needed -- often, the company provides "remote advice," perhaps consisting of a telephone call to give a safe route to the airport. That's often safest option for all parties concerned.

Control Risks has (or, had) hundreds of corporate clients in Libya ranging from oil services firms to technology companies to management consultants, none of which he would name, citing confidentiality. Brooks does allow that the resources the company had in place in Libya were substantially less than what it had in Egypt before the protests started in that country. But it did have plans, and they were successfully carried out. "We have completed all evacuations for the time being and are yet to embark on assisting clients to re-enter or secure their assets," Brooks says.

Another outfit, Global Rescue, which had fewer clients in Libya, also has gotten all or most of its clients' employees out. That company, which concentrates solely on rescue operations (Control Risks provides a range of services, like strategic planning and general security), actually does employ a lot of ex-Special Forces and ex-Navy Seal personnel. But even here, the idea is to avoid encountering trouble in the first place, says CEO Daniel L. Richards. "We take evasive action first."

The real work of companies like Global Rescue and Control Risks is done before any problems occur: plotting escape routes, conducting detailed scenario planning, ensuring that resources and personnel are in place or can be quickly deployed. "We've got most of the areas in the world covered where people might at some point want to be evacuated," Richards says.

Still, the recent events in the Middle East and North Africa have come as a surprise to everybody, and rescue companies have not been an exception. "This was not envisioned," Brooks says. But the whole idea of protecting companies in volatile areas is to be prepared for any eventuality. That's crucial, he adds, not only for the safety of personnel, but because "the company [meaning, the client] that gets this wrong will suffer long-term financial consequences."

Perhaps counter-intuitively, given the level of violence in Libya, getting Western employees out of that country was easier than getting them out of Egypt. There are several reasons for this Richards says. First, "Western companies have significantly less exposure" in Libya. (BP (BP) and Shell (RDS) are among the international oil that were operating in Libya, along with Italian firm Eni and French company Total. Some big companies, like Coca-Cola (KO, Fortune 500), actually operated through local franchises, many controlled by Qaddafi family members.)

Still, for all those big corporate names, the number of expats on the ground was relatively small. "It takes a lot of aircraft to pull 50,000 people out of Egypt," Richards says. But his company had just a few hundred people to extract from Libya. And although Richards says the "increasingly delusional" and increasingly violent Muammar Qaddafi presented potential danger to Westerners, for the most part, he left them alone and allowed them to leave with little friction. "Foreigners," says Brooks, "were never actually targeted, though that was certainly a risk."

In Egypt, says Richards, "the challenge was getting people to the airport. In Libya, many of them were already at the airport" as soon as it became clear that trouble was brewing. The nature of every situation is different and unpredictable. Richards compares the current situations to earlier ones Global Rescue handled, such as in Lebanon and Georgia. In those cases, "there was no air travel at all," and many people had to be shepherded out over land. That's when it's good to have some heavily armed Rambo types with you.

And, again counter-intuitively, the fact that Libya is so particularly dangerous actually helped in some ways. Many Western companies had employees living and working in secure compounds, where they had food, water, satellite phones and generators. If for some reason there were delays on getting them out of the country, they would at least have been relatively safe and comfortable, and in touch with the outside world, until they could be extracted.

The question facing security contractors now is where the next hotspot will be. They are, like the rest of the world, keeping an eye on Bahrain, Yemen, Saudi Arabia and other countries where there are indications of unrest (there is Internet chatter about planned demonstrations in Saudi Arabia on March 11, for example). But a crisis could suddenly erupt in sub-Saharan Africa, Asia, or just about anywhere else where there is a despotic government and angry, empowered populace. Says Richard, "we're as curious as anyone else where all this will go."