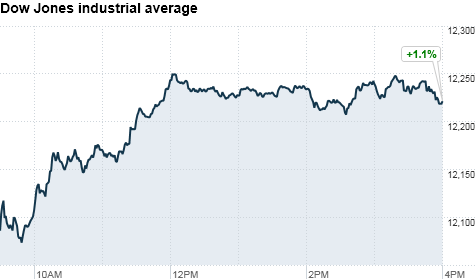 Bank of America (BAC, Fortune 500) sparked a rally in financial shares after CEO Brian Moynihan issued a rosy multi-year outlook at the bank's first shareholder meeting in four years. Moynihan also said the banking giant plans to increase its buyback program and may raise its dividend.

Shares of other retail banks were also higher, with SunTrust (STI, Fortune 500), USBancorp (USB, Fortune 500) and Hutchington Bancshares (HBAN) each rising 3% or more.

"The whole financial sector was way oversold, so this move could be just a technical bounce," said David Rovelli, managing director of U.S. equity trading at Canaccord Adams. "There's still a ton of risk in the financials and BofA still has the mortgage processing problems."

Oil prices: Investors continue to monitor developments in Libya and the civil war's effect on energy prices. Oil futures lost 53 cents or 0.5%, to $104.91 a barrel Tuesday. The retreat came a day after prices spiked to almost $107.

Gold also eased from the prior session's highs, with prices closing down $7.30 to $1,427.20 an ounce. Gold settled at a record high of $1,434.50 an ounce Monday, as investors sought perceived safety in the precious metal.

Investors have been focusing on geopolitical developments and oil prices across North Africa and the Middle East. Traders are worried that spreading unrest will keep commodities at these elevated levels and will undermine the economic recovery.

"When you throw together high oil with increases in cotton, soy and food, you have a nasty combination that will impact earnings," Rovelli said. "The whole key is how long commodities stay up there. If they don't start to decline, it's going to be a burden on stocks."

Over the long term, however, analysts surveyed by CNNMoney agree that the oil and gold volatility will fade as the crisis in Libya abates.

"The situation in North Africa and the Mid East is a wild card but it remains a situation that you don't want to disrupt your portfolio for," McDonald said. "Stick with companies with solid balance sheets who are positioned for strong economic growth."

Shares of Sprint Nextel (S, Fortune 500) jumped 5%, on reports that the company was in early negotiations with Germany's Deutsche Telekom to sell Deutsche's T-Mobile business to Sprint.

Morgan Stanley (MS, Fortune 500) is considering dropping the Smith Barney name from its brokerage business, according to sources cited in the Wall Street Journal. Shares gained 1.7%.

Economy: There were no major reports on Tuesday's calendar.

Currencies: The dollar gained against the euro, the Japanese yen and the British pound.