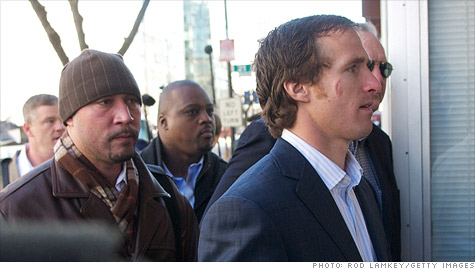 NEW YORK (CNNMoney) -- March is typically not the time for football fans to give much thought to the upcoming season. But this is not a typical year, and fans who want to see games start as normal this fall have good reason to be worried.

A week of extended negotiations between the National Football League and the NFL Players Association have failed to produce a new labor contract.

The team owners have threatened to lock out the players -- a move that could affect the scheduled start of the season this coming fall. There is even a chance that the entire season could be lost. Although most experts see that as unlikely, rating agency Standard & Poor's has said it believes the owners have the financial wherewithal to go a full year without games being played.

With the failure of the talks, the union immediately moved to decertify itself Friday afternoon. That opened the door for a antitrust lawsuit against the league by some of the union's star players, including quarterbacks Drew Brees, Tom Brady and Peyton Manning.

The players hope to win their arguments in court rather than at the negotiating table. But now that there is no longer a union to negotiate with the owners, resuming talks and reaching a new agreement are much more problematic.

Key issues in the labor talks include how teams and players will split an estimated $9 billion in annual income, whether there should be limits on salaries for rookies' contracts. The owners have also pushed for the addition of two regular season games each year, although the league's chief negotiator said Friday that they had backed away from that demand for now.

The NFL is so overwhelmingly popular -- this year's Super Bowl was the most watched program in television history -- that the talks have become a major concern for many fans.

Here's a quick overview of questions that might be in the minds of many fans.

Why is this a crucial moment for the talks?

The owners have been wanting to get out of the current deal for some time, but they couldn't until it expired. Without a new deal, owners will likely move to lock out the players. In other words, it would be a work stoppage imposed by management rather than the union.

"There's a line of thought [owners] don't want there to be football unless there's a resolution," said Andrew Zimbalist, an economics professor at Smith College and an expert on labor relations in sports.

Even if there is a lockout, and even without a union, there could be a new deal reached between now and August, which would mean business as usual this season. The NFLPA continues to exist, although as a trade association of players, not a union.

But few expect a deal anytime soon without a new deadline. And the closer to the scheduled start of the season that talks drag on, the better the chance that some games could be cancelled.

A lockout in the National Hockey League wiped out the entire 2004-05 season, and the 1994 baseball strike caused the cancellation of the playoffs and World Series. Once labor work stoppages start they can be tough to end.

Why did the union move to disband?

Doing so opened the door for players to sue the 32 teams of the NFL for violating the nation's anti-trust laws by acting together to limit player salaries. The presence of the union and a collective bargaining agreement is the only thing preventing those kinds of legal challenges.

The union used that maneuver in 1989, a move through which the players won the right of free agency -- the ability to sign with the team willing to pay the most money.

There are questions whether such a strategy will work this time, though. The NFL has already filed notice with the National Labor Relations Board that a move by the union to decertify is a sham negotiating ploy.

"It's anyone's guess what would happen," said Gabe Feldman, a law professor at Tulane University and a legal analyst for the NFL Network, a cable channel owned by the league. "We're dealing in uncharted territory here."

If the union does not move to decertify while the current labor agreement is still in force, it would have to wait six months in order to decertify. That's why March 11 is now a critical deadline following the latest extension.

Does decertification make a loss of games more or less likely?

That is not clear.

As part of the lawsuit, the players are asking a judge to prevent owners from shutting down the league. It's not clear if a judge would grant that motion.

Without an injunction, the league could go ahead with its lockout plans, but it wouldn't have a union with which to reach a new labor agreement. That could make restarting games more problematic.

"The two parties have a large difference on economics, but economics are easy to resolve, especially when it's a healthy industry," said Marc Ganis, head of SportsCorp, an industry consulting firm. "But a decertified filing increases the possibility that games will be lost because so many legal proceedings have to be resolved."

Feldman said that if the union wins an injunction against a lockout, it could insure fans that the games would proceed as scheduled while the battles are fought in court.

The owners would simply impose the contract terms they want on the players in the absence of any union to oppose them. That's what happened when the union last decertified in 1989.

But Ganis said the legal threat to the owners is too great. If the court found them to be in violation of anti-trust laws they would face paying triple the economic damages. So they would challenge any injunction preventing them from shutting down the game. And Ganis thinks the owners would win.

"Every business group in the country would come out in support of the owners saying 'How can you demand a business operate without knowing its cost and legal exposure?'" said Ganis.

Who would lose during a lockout?

Pretty much everyone involved in the league.

Assistant coaches and non-playing staff with many teams would be laid-off. Stadium staff -- those who sell concessions, take tickets and clean-up after the fans -- would lose those part-time jobs. The players would lose salaries they might never get back since most players only last a few seasons in the league.

Networks and sponsors would have to continue to make about $4 billion in rights fee payments to the league -- even though they don't have any games to broadcast or sell advertising on.

Media companies and advertisers would get that money back after a lockout. But there would be an undeniable ratings hit for CBS (CBS, Fortune 500), News Corp.'s (NWS, Fortune 500) Fox, Comcast's (CMCSA, Fortune 500) NBC and Walt Disney Co.'s (DIS, Fortune 500) ESPN networks.

A judge also ruled earlier this week that the owners won't have access to the rights fees during a lockout. But ratings agency Standard & Poor's said it still believes the league has the financial resources to weather at least a full season without games being played.

The league said the ruling doesn't change its negotiating strategy. "Our clubs are prepared for any contingency, this decision included," the NFL said in a statement.

Some fans, those who buy luxury suites and club seats, would also have to continue to make many of their ticket payments, although once again, they are likely to get refunds for lost games once a work stoppage ends.

Biggest losers in NFL lockout? Everyone.