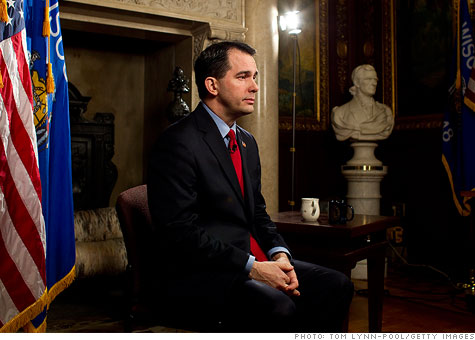 The Republican governor was savoring his success Thursday in limiting collective bargaining for public employees in Wisconsin after a contentious and drawn-out battle.

The measure will give state and local governments the flexibility they need to raise workers' health care and pension premiums to help balance their budgets, Walker says.

But unions were also celebrating the outpouring of strength and support for their cause. Tens of thousands of union workers have descended upon state capitols around the nation to protest looming threats to their members, including in Ohio, where lawmakers are also on track to eliminate collective bargaining for state workers.

"We should have invited him here today to receive the Mobilizer of the Year award!," AFL-CIO President Richard Trumka said in a speech Thursday.

Of course, Walker's bill will not sit well with many public employees in Wisconsin. They will have to pay thousands of dollars more for their health care and pension benefits. They also will no longer have a say in workplace conditions.

But the hard-charging governor also has managed to make collective bargaining synonymous with fairness and worker rights in the public's mind, said Harley Shaiken, a labor professor at the University of California, Berkeley. Many Americans see him as running roughshod over the democratic process.

"He has sparked the most energized labor movement in decades," Shaiken said. "He's recruited many people who are angry at what they view as a power grab."

While several other states are looking to curtail collective bargaining, the surprisingly strong blowback in Wisconsin and Ohio may lead some politicians to soften their stance, said Rebecca Givan, assistant professor at Cornell's School of Industrial and Labor Relations. They may wait to see what happens with the push to recall Republican state senators and at the ballot box in 2012.

"Republican governors in other states will have to balance their agendas in cutting public sector collective bargaining with public opinion since they want to get re-elected," Givan said.

While Walker may have shifted public sentiment to the unions' favor, he may also push people away from working in the public sector. Fewer people will likely opt for government work if the benefits and pay become less attractive, said Craig Olson, a labor professor at the University of Illinois.

For instance, Wisconsin's teachers will have to shell out about $5,000, or 10% of their wages, on average, to pay for increased medical and pension benefits, he said. And their raises will be limited to cost-of-living increases.

"It's going to be more difficult to attract high-quality people into public service," Olson said.