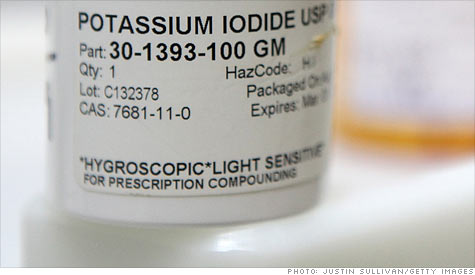 The FDA says consumers do not have to stock up on potassium iodide (above) to protect against radiation. The agency also warns that fake iodide products may hit the market. By Parija Kavilanz, senior writerMarch 18, 2011: 1:42 PM ET

NEW YORK (CNNMoney) -- In the wake of the crisis in Japan, the U.S. Food and Drug Administration is advising consumers to beware of inadvertently buying fake iodide products that are supposed to help protect against radiation.

"We're alerting consumers to be wary of products that falsely claim to prevent radiation and protect consumers, or are not FDA-approved," said an FDA spokesperson.

The demand for potassium iodide in the U.S. has spiked as the situation in Japan has worsened, she said. But health experts say there's no need for U.S. consumers to stock up on potassium iodide.

Products to watch out for include fake tablets and liquids purporting to be iodide, as well as dietary supplements and other products that say they protect against radiation, said the spokesperson.

The agency added information about radiation safety on its website that includes more details about what to beware of before buying iodide products.

There are only three FDA-approved potassium iodide products that protect against radiation. The agency's website identifies them as Iosat, made by Anbex; ThyroSafe from Recipharm AB; and ThyroShield from Fleming & Co.

At all three companies, the products are currently out of stock, according to their websites.

CVS (CVS, Fortune 500) and Walgreens (WAG, Fortune 500), two of the nation's largest drugstore chains, don't sell potassium iodide drugs in stores. CVS sells an over-the-counter variety of the drug on its website, but said it sold out of it last weekend.

Don't hoard it: Both the FDA and the Centers for Disease Control and Prevention said consumers do not have to stock up on potassium iodide.

Even as Japan's nuclear crisis continues, the CDC's top radiation expert said it currently poses no risk of radiation exposure in the United States.

"There is no radiation coming into the United States from Japan," Charles Miller, head of Radiation Studies with CDC's National Center for Environmental Health, said Wednesday.

Environmental and health experts are closely monitoring the situation for any changes, he said.

"We are especially concerned if what people are buying isn't approved by the FDA," he said.

When to take it: People should not panic and run out to buy iodide, said Dr. Stewart Weiss, an endocrinologist and clinical professor of medicine with New York University Medical Center.

Unless there is a real threat of harmful radiation exposure, taking iodide drugs needlessly could be harmful, he said.

"Many people are allergic to iodine," he said. Iodine is the chemical produced by the drug.

Taking iodide could also worsen existing thyroid conditions, he said, or lead to side effects such as skin lesions, and be harmful to children in excessive doses.

"So anyone that's hoarding it to protect themselves is missing the point," he said. "It does not protect other organs from radiation exposure."

What to watch out for: Roger Bate, an expert on counterfeit and adulterated drugs at the American Enterprise Institute, said the FDA and CDC's concerns don't surprise him.

"In previous instances, when there's been a major concern about a health problem, we've seen fake drugs hit the market," said Bate.

It can happen as quickly as just a few days, he said. "It recently happened with fake Tamiflu that was sold online," he said. After 9/11, Bate said regulators became aware of fake Cipro, an antibiotic used to treat anthrax, hitting the market.

Adulterated or fake drugs can contain anything from chalk to road paint to fungal bacteria, he said.

How can consumers protect themselves? "You have to trust the source, the manufacturer," he said.

If you do buy iodide, check the packaging to make sure it's from one of the three FDA-approved manufacturers.

If you purchase online, check that the seller is a credentialed pharmacy by consulting the National Association of Boards of Pharmacy or pharmacychecker.com, he said.

"There are more than 10,000 websites selling drugs," he said, referring to all drugs, not just potassium iodide. "But only a few hundred are licensed sellers. Looking at that ratio, there's significant risk of bad drugs reaching consumers."