The tiny cube that could cut your cell phone bill 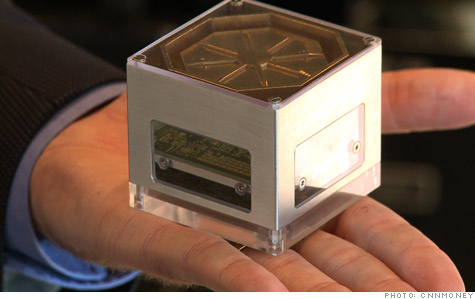 LightRadio is small enough to fit in the palm of your hand, but Alcatel-Lucent designed it to fix a big problem. By David Goldman, staff writerMarch 21, 2011: 7:10 AM ET

NEW YORK (CNNMoney) -- As mobile data usage skyrockets, wireless companies are spending billions each year to maximize capacity, and consumers end up footing the cost in the form of higher cell phone bills.

But a cube that fits in the palm of your hand could help solve that problem.

It's called lightRadio, a Rubik's cube-sized device made by Alcatel-Lucent (ALU) that takes all of the components of a cell phone tower and compresses them down into a 2.3-inch block. Unlike today's cell towers and antennas, which are large, inefficient and expensive to maintain, lightRadio is tiny, capacious and power-sipping.

As tiny as it is, it has been tasked with solving an enormous problem.

The global wireless industry is spending $210 billion a year to operate their networks, and $50 billion to upgrade them, according to Alcatel-Lucent and PRTM. Networks are dealing with that cost by putting data caps in place with heavy overage charges and by raising prices on their smartphone and tablet plans.

With a combination of miniaturization and cloud technology, lightRadio just might be able to help wireless carriers keep pace with their customers.

When conceiving of lightRadio, Alcatel-Lucent's engineers stripped out all the heavy power equipment that controls modern cell towers, and moved them to centralized stations. That allows the lightRadio cubes to be made small enough to be deployed virtually anywhere and practically inconspicuously: Atop bus station awnings, on the side of buildings or on lamp posts.

Their small size and centralized operation lets wireless companies control the cubes virtually. That makes the antennas up to 30% more efficient than current cell towers. Live data about who is using the cubes can be assessed, and the antennas' directional beams can be shifted to maximize their potential. For instance, radios may be pointed in one direction as people are coming to work in the morning and another direction as they're leaving work at the end of the day.

The lightRadio units also contain multi-generational antennas that can relay 2G, 3G and 4G network signals all from the same cube. That cuts down on interference and doubles the number of bits that can be sent through the air.

Today's cell towers, by contrast, send power in all different directions, most of which is lost, since it doesn't reach anyone's particular devices. They're inefficient in other ways as well: Roughly half of the power from cell towers' base stations is lost before it makes its way up to the antennas at the top of the tower. And they have separate antennas for 2G, 3G and 4G networks, causing interference problems.

All of lightRadio's smart technology and power efficiency can help cut carriers' operating costs in half, Alcatel-Lucent believes.

"We need to think differently about this, because no one wants limits," said Tod Sizer, head of wireless research at Alcatel-Lucent's Bell Laboratories. "We hope to solve this problem so that the AT&Ts (T, Fortune 500), Verizons (VZ, Fortune 500) and Sprints (S, Fortune 500) of the world will be able to provide the data capacity that is needed by the customer."

The lightRadio trials will begin in September 2011, and the company expects to be producing them in volume by 2012. Several carriers have expressed interest in the technology, and Sprint Nextel plans to try out the cubes later this year.

"Sprint is talking to Alcatel Lucent about this technology and we will be working with them to test and evaluate it," a Sprint spokeswoman said. "We have been aggressive in smaller factor cell sites to help us support the growth in data traffic."

Sizer said he sees lightRadio as a complimentary technology to existing cell towers. Those big antennas still serve a purpose, providing long distance signals or beams down a highway.

But as wireless companies add infrastructure to keep up with the ever-rising data demands from tablets and smartphones, carriers are finding that they're running into a cost and a space issue: Towers are expensive, and they're running out of room to erect new ones.

"The thing that's incenting us to move quickly is that more and more people are using smartphones, and my customers are being crushed by the enormous amount of data that people want to use," said Sizer. "We have to meet the access demands of the consumer, who wants to access data in any place."