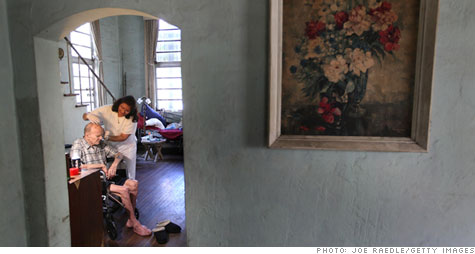 Consumers are paying an additional $1,355 a year on hidden out-of-pocket health care expenses. These include home health aides not covered by insurance, alternative medicines, ambulance services and nutritional products. By Parija Kavilanz, senior writerMarch 23, 2011: 5:31 AM ET

NEW YORK (CNNMoney) -- A year after the passing of health reform, a new industry report revealed that consumers may be paying billions of dollars more in out-of-pocket health care expenses than was previously thought.

These "hidden" costs of health care -- like taking time off to care for elderly parents -- add up to $363 billion, according to a report from the Deloitte Center for Health Solutions, a research group.

That amounts to $1,355 per consumer, on top of the $8,000 the government says people spend on doctor fees and hospital care.

"We're surprised that this number came in so high. It's significant," said Paul Keckley, executive director with the group.

The out-of-pocket costs that the government tallies usually include only insurance-related costs like premiums, deductibles, and co-payments.

Keckley said the study is the first to estimate how much consumers dish out on health care related goods and services not covered by private or government insurance.

"These costs can add up to billions of dollars, even eclipsing housing as a household expense," said Keckley.

The Deloitte study found that half the hidden costs are for supervisory care, or the unpaid care given by family and friends.

"We compared on an hourly basis the average number of hours per month taken off work to look after a family member or friend, and lost wages in doing this," said Keckley.

"It has been one year since the passage of health care reform," said Keckley. "We wanted to understand the financial context behind decisions that consumers are making about how they spend their money on health care."

As health reform rolls out over the next few years, Keckley expects that out-of-pocket health care costs to consumers will increase quickly. Health care costs continue to rise faster than household incomes and insurers are passing along more costs to their customers.

"This is a perfect storm in which consumers' hidden costs will only increase exponentially in the near future."

The Deloitte study looked at the most recently available health care expenditure data from the government. The firm, with Harris Interactive, also polled 1,008 U.S. adults,18 and older, between Sept. 29 to Oct. 4, 2010.