Cheezburger: I Can Has Internet Memes 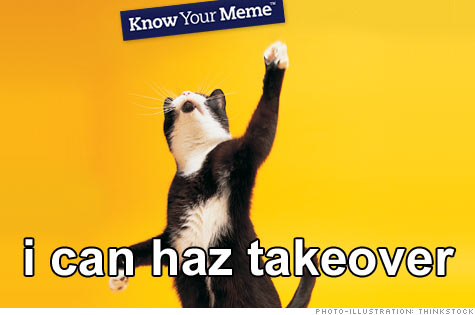 NEW YORK (CNNMoney) -- Fresh off a $30 million funding round, Internet publisher Cheezburger Network -- known for FAIL blog and LOLcats -- is expanding its New York presence by acquiring Know Your Meme.

Neither party would disclose financial details of the deal, which is rumored to be in the low seven figures.

The Web publisher known for inventing memes will now own a site dedicated to documenting them.

"There was a vacuum in our publishing portfolio," Cheezburger founder Ben Huh says. He believes Cheezburger's readers will benefit from the addition of a site that explains viral content and evolution of stories on the Internet.

So what exactly is an Internet meme?

Were you singing Rebecca Black's "Friday" on repeat, or asking the towel-clad "Old Spice Guy" questions on Twitter or Facebook? Remember the Double Rainbow dude?

If the answer is yes, you're familiar with a "meme" -- a catchphrase (think of Charlie Sheen's #tigerblood) or a concept that becomes a byproduct of the Internet, spreading through e-mails, blogs and social networking sites.

"We try to provide a coherent timeline on how these phenomena evolve and develop through conversation," says Know Your Meme editor Brad Kim.

Know Your Meme began as an extension of video blogging site Rocketboom.

Huh plans to expand the site's team of four employees, and to devote additional resources to building a data-based tracking system that will monitor trends from the moment they go viral.

"As Internet culture becomes greater and greater, we'll know much more about how culture is created because we'll have documented it," Huh says.

The acquisition is also a part of Seattle-based Cheezburger's expansion strategy.

How the 'double rainbow' video blew up