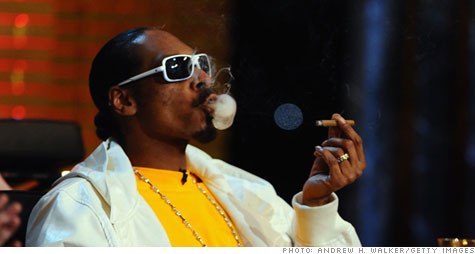 NEW YORK (CNNMoney) -- Look out, Four Loko. There's a fruity-booze rival coming to the market -- Blast from Colt 45 -- and rapper Snoop Dogg is its pitch man.

Blast, produced by Pabst Blue Ribbon's Colt 45, is an alcoholic drink but does not contain caffeine, the ingredient that got Four Loko and a group of partying college students in trouble last year.

Snoop Dogg, also known as Calvin Broadus, has been promoting the drink at various locations in Southern California with a bevy of attractive women wearing "Blast by Colt 45" tank tops. Colt 45's Facebook page also showcases a San Francisco party with hipsters drinking from glasses of bright blue Blast, served on the rocks.

Pabst Blue Ribbon, the maker of Colt 45 and Blast, said the product will appear on cooler shelves on April 5. The Blast website says it will be offered in four neon flavors: grape, raspberry watermelon, strawberry lemonade and blueberry pomegranate.

"It's a great liquid, as we call it in this business," said Jon Sayer, chief marketing officer for Pabst Brewing Co. "We really think it tastes great when you serve it over ice."

Sayer said it will be offered in 23.5 ounce cans, or in six-packs of seven-ounce bottles.

But this is no kid's drink. Blast packs a drunken wallop at 12% alcohol, the same alcohol per volume as Four Loko.

The alcohol content of Four Loko and Blast is comparable, more or less, to many types of wines. But it's more than double or triple the strength of beer, which typically ranges from 4% to 5% alcohol.

Four Loko, in its caffeinated form, was banned in November after nine students at Central Washington University in Ellensburg, Wash., had to be hospitalized. After that incident, the Food and Drug Administration issued a warning to four manufacturers of caffeine-laced alcoholic products, including Phusion Projects, the maker of Four Loko.

"There is evidence that the combinations of caffeine and alcohol in these products pose a public health concern," said FDA principal deputy commissioner Joshua Sharfstein.

Four Loko disagrees with the notion that alcohol and caffeine are a dangerous combination.

"We contended then -- and still believe -- that the combination of alcohol and caffeine is safe," said Phusion spokesman Chris Short.

Four Loko is back on the shelves after it was reconfigured without caffeine.

"We took this step after trying -- unsuccessfully -- to navigate a difficult and politically-charged regulatory environment at both the state and federal levels," said Short.

Having learned from the travails of Four Loko, Pabst's Blast is shunning caffeine right from the outset.

Short said he isn't worried about the competition.

"We welcome it," he said. "Four Loko has a very loyal fan base that has shown a commitment to our brand and our products. They've really stuck by us."