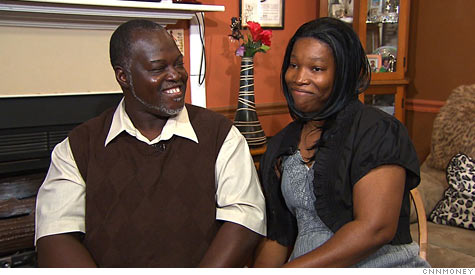 SMITHFIELD, N.C. (CNNMoney) -- The Wards couldn't believe the news when their tax preparer called to tell them they're getting a $54,000 refund this year.

Thelma Ward was speechless. She had to hand the phone to her husband so she could dance around the living room floor in shock.

"I was thanking God like never before," she said. "We're just overwhelmed -- that amount was so huge it was unbelievable."

"We couldn't believe it when we totaled everything up. We were like, that can't be right," said Dee Carter, owner of the local H&R Block where the Wards have brought their taxes for more than 10 years. "We had never seen anything like it before, so we had to check it over and over again."

So what's bringing this windfall? The federal adoption tax credit.

In the past few years, the Wards have expanded their already big clan of seven children by adopting five new kids. For each of these adopted children, they are eligible for a one-time tax credit of up to $13,170.

The credit has been around since 1997, but this tax season it is refundable for the first time -- which is the tax equivalent of hitting the jackpot.

A refundable tax credit lets you get the cash even if you owe no taxes. A non-refundable credit just offsets any taxes you owe, and then rolls anything remaining to the next tax year.

The Wards adopted the five children over a span of three years, so they've filed for the tax credit each year. But because they didn't make enough money, the tax credit simply rolled over from year to year and accumulated.

This year, because the credit became refundable, they are getting all the previous years' leftovers in a lump sum. (The couple had an earlier adoption, in 2004, but unused credits can only be carried for up to five years.)

While the Wards haven't received the refund check yet, H&R Block calculated that the unused adoption credits from the past five years add up to $45,560 -- making up the majority of the $54,000 refund they're expecting.

"When this was first coming through the tax reform legislation, we just kept looking at it going, 'Wow, this is really, really significant for people adopting,'" said Kathy Pickering, executive director of The Tax Institute at H&R Block. "It's not a large population who can claim it, but for those who do, it can really change their lives."

A typical private adoption runs about $30,000, so the credit was intended to help families by reimbursing expenses, such as court fees. But the tax law allows parents who adopt "special needs" children to receive the entire credit even if they had no expenses.

All of the Wards' foster children qualified as special needs, so Thelma was able to claim the full credit even though there were no adoption expenses. This is not unusual for foster children; about 80% of these kids are considered to have "special needs."

"People adopting from the foster-care community are typically lower and moderate income, and most don't have a significant tax liability, so the credit never helped them," said Mary Boo, assistant director of the North American Council on Adoptable Children. "The expenses they have are life-long, so the government really stepped up this year to help these people."

"We didn't get into foster care to adopt anyone, but when we started being foster parents we couldn't let a child leave us without a place to call home," said Thelma.

She had to quit her job at a daycare to take care of her new children. And her husband, David, who works at a concrete company, had to take a significant pay cut last year to keep his job. The one saving grace: As foster parents, they receive about $3,300 a month from the state of North Carolina until the children turn 18.

"Any little bit helps, but it still doesn't cover it," said Thelma, who has had to learn to stay on a tight budget to afford giving her children the care they need.

Kelli, only three years old, has a serious heart condition and has required medical attention since she was born. She is scheduled for a major heart surgery this month.

Octavius has a heart murmur and is in and out of the doctor's office constantly. And all of them -- including Joquavius, Zoie and Mckayla -- require either speech therapy, psychiatry or special classes for learning disabilities.

This attention really adds up, both emotionally and financially. So to save money, Thelma focuses on the little things, like using coupons everywhere she can, selling her children's clothes at consignment stores, buying everything used and holding yard sales.

While the kids are at school, Thelma goes to three grocery stores to do her weekly shopping. But the family's weekly grocery bill still totals around $400, including the more than three gallons of milk and four loaves of bread the children go through. It usually takes five or six trips to the car to get all the groceries unloaded.

The Wards hope to use their windfall refund to take their big family on a vacation, pay bills, and buy new windows for their home -- which needs a little repair after housing so many foster children over the past years.

"We'll have to see what we can afford," said Thelma. "Money comes and money goes, so we want to make sure we spend it all wisely."

Many more families are also finding themselves in the enviable place of planning what to do with such a windfall. Tax preparer H&R Block said 8,000 of its own clients have already claimed the credit, and the company expects 150,000 total taxpayers to claim it this year.

That's a 50% jump from the 2009 tax year -- but not because adoptions have increased that much. Instead, many people who had no tax liability in previous years, and thus wouldn't have been helped by the credit, are now filing. And some of the refunds it has seen range as high as $90,000.

A couple from Alabama, Tina and Kenny Thomas, recently adopted five kids from foster care and are now expecting a check for a whopping $65,000, thanks to this credit. Like the Wards, they had absolutely no idea it existed until they went to their tax preparer.

"We went in having no clue about the credit, and we even thought we may have to pay money," said Tina Thomas. "We never, never would have expected it."

But before you run out to adopt a child in order to cash in on this credit, know that the IRS is a stickler for documentation and isn't doling out refunds like this to just anyone.

"If you're claiming the credit because of the nature of the credit and the size of the refund, there are many documentation requirements that Congress included along with it," said Eric Smith, a spokesman for the IRS. "It is a generous credit for those who qualify -- that's why policymakers want to make sure the people who deserve it get it, and those who don't, don't."