The $1 million soldier: What's wrong with how we budget war 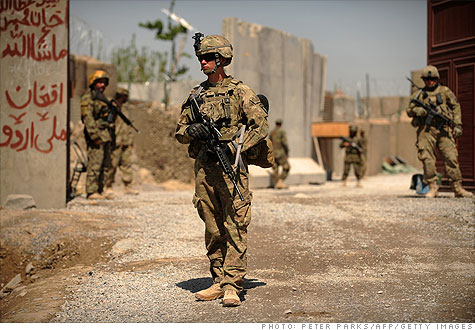 U.S. soldiers stand guard before the opening ceremony for a newly completed mosque in a village in southern Kandahar province, Afghanistan. By Lawrence Korb and Laura Conley, CNNMoney guest columnistsApril 4, 2011: 5:35 AM ET

The two-week-old military action in Libya has prompted a frenzy of headlines and sound bites about the operation's cost.

Can the United States afford it?

The short answer is "yes." The defense budget exceeds $500 billion a year, so the Pentagon has money on hand to pay for Libya.

But that's not the whole story. The recent events in Libya have opened up a long-standing and important debate about how we pay for our wars and military endeavors around the world.

The crux of the problem is that in recent years, Congress has paid for wars through emergency supplemental bills. At the same time, other defense costs were allowed to spin out of control.

And the costs have added up: The total bill for the wars in Iraq and Afghanistan has reached $1.5 trillion to date.

Estimates of the cost for boots on the ground in Iraq and Afghanistan vary, but some researchers place the average bill as high as $1 million per troop per year in Afghanistan and more than $600,000 in Iraq. Therefore, the cost of deploying 100,000 troops in Afghanistan this year will amount to over $100 billion.

These estimates depend on a wide range of factors, including transportation costs, the need to build facilities to handle an influx of personnel, and whether troops deployed are primarily active duty or activated reservists. (The latter lead to additional personnel costs, as they are not regularly paid a full-time salary.)

Can seized Libyan assets pay for the war?

Congress hasn't always funded wars through separate supplemental budgets. The costs for the conflicts in Vietnam and Korea for the most part were folded into the regular budgets that were submitted to Congress. And while the overall size of the budgets rose during those years, they did not rise to fully reflect the total cost of the war.

In order to keep the total federal budget in balance, the Pentagon eliminated some marginal programs not connected to the war.

Thus from 1964, the last year before the buildup, to 1969, the height of the buildup in Vietnam, the overall defense budget increased $27 billion to $79 billion. But when the actual war costs were subtracted, the 1969 defense budget declined in real terms by $15 billion, or 29%.

Similarly, in the Korean War, the Defense Department received a supplemental war budget only in 1951, the first year of the conflict. By 1953, the overall defense budget was actually lower than it was in 1951.

The Bush administration adopted a completely opposite approach to funding its wars.

Not only did it provide the Pentagon with more than $1 trillion in supplementals, it allowed the base budget to grow from $290 billion in fiscal year 2001 to over $500 billion by the time Bush left office.

Moreover, President Bush allowed the Pentagon to shift items like the F-22 fighter plane and V-22 aircraft, which belonged in the base budget, into the supplemental.

The majority of the costs for Libya, especially since the president has said he won't order ground forces, can be funded through the regular defense budget.

For example, some fuel, maintenance and personnel costs for operating U.S. B-2 bombers over Libya will be partially offset by the regular defense budget because those planes would be flown periodically, in any case, for training purposes.

Similarly, planes and ships used in the operation are normally deployed to the Mediterranean on a routine basis. In other words, we do not have to pay extra to have them there.

Finally, even after firing some 160 Tomahawk missiles, the U.S. still has over 3,000 in its inventory, more than enough to deal with any likely contingency.

Of course, it remains to be seen how much the Libyan operation will end up costing U.S. taxpayers.