Tax audits: 78% are done by mail, not in person 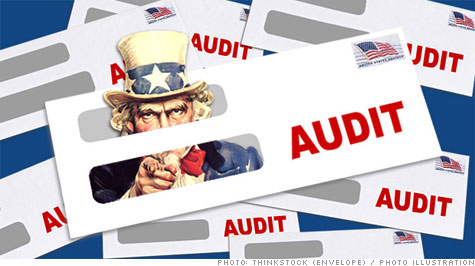 NEW YORK (CNNMoney) -- You're now almost four times as likely to conduct your tax audit by mail, as you are to sit down with the tax man.

Of the more than 1.6 million Americans who were slapped with audits last year, 78% dealt with correspondence audits, while only 22% were asked to come in for an in-person examination.

"When people think of audits, they think of being in an office and going to war with someone from the IRS," said Thomas Cooke, a professor of accounting and business law at Georgetown University. "Years ago you could almost guarantee you would have to go in and see someone to do it, but this isn't the case anymore."

Why the shift? Because correspondence audits are cheaper for the IRS. Plus, Cooke said many people take action as soon as they get the audit notice in the mail, in hopes that it won't escalate to a visit from Uncle Sam.

"People are scared to death when they get these letters, so they do everything they can to resolve the problem right away to make it not go further," he said.

While a face-to-face examination with an IRS agent can involve going through an entire return, correspondence audits usually ask taxpayers to provide information about very specific items on a tax return, like income, expenses or deductions.

"It's an effort to try to cut costs and focus their efforts, and there are pluses and minuses to it," said Ed Smith, a tax partner at BDO. "A plus would be if there are only one or two items the IRS is interested in, because they can focus their time and effort on those items and it's more efficient for both parties. On the other hand, depending on the complexity and detail needed to support something, it may be difficult for the taxpayer to respond to a correspondence audit and easier to go over things in person."

Even if the information the IRS is requesting is basic, the complicated jargon often makes it hard for people to understand that the letter they have opened is even an audit, national taxpayer advocate and IRS watchdog Nina Olson said in an interview with CNNMoney.

Out of a sample of 754 taxpayers who claimed the Earned Income Tax Credit and were audited, more than a quarter of them had no idea they were even being audited, the Taxpayer Advocate Service's most recent survey found. Nearly 40% of the same respondents didn't know what information the IRS was asking them to provide.

And that's if they even received the audit in the first place. The IRS rarely checks to make sure letters have been sent to the correct addresses -- and about 10% of overall mail from the IRS is undeliverable, TAS has found.

In addition, 70% of people surveyed by TAS said they prefer not to communicate with the IRS through correspondence audit, and would rather communicate in-person or over the phone.

But the IRS argues that resolving tax-return issues by mail can really benefit both taxpayers and the IRS, saying that mail audits are mainly sent when there are fewer issues with a return and a full in-person audit isn't required.

"In comparison to other audits, correspondence examinations require fewer resources from either the IRS or taxpayers, are considerably less invasive for taxpayers, and effectively contribute to the tax administration objectives of fostering voluntary compliance and reducing the Tax Gap," the IRS stated in response to a recommendation from TAS to conduct fewer mail audits.

And the fact that the IRS is "vastly understaffed" and currently looking at possible budget cuts that would strip the agency of $600 million in funding is only likely to cause mail audits to continue to rise, said Olson.

"I would love to see the IRS go back to doing more field audits -- in most cases, it's less burdensome for taxpayers if they have someone they can talk to," she said. "But the IRS is moving in the opposite direction, and now with proposed budget cuts, there will be greater pressure to use more automation."

Your tax bill: 3 months of work