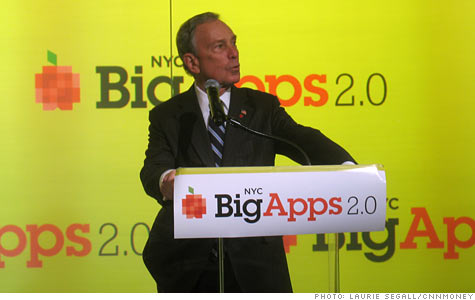 NYC Mayor Michael Bloomberg is turning public city databases over to entrepreneurs, whom he hopes will launch new tech businesses atop them. By Laurie Segall, staff reporterApril 5, 2011: 5:41 AM ET

Since taking home the grand prize, the company has expanded from New York to 50 cities, including Germany and London. It recently the crew secured $5 million in funding from FirstMark Capital, IA Ventures and BMW's new iVentures fund.

David Mahfouda, who worked on a startup called "wheels," wanted to create an app that would make transportation around the city less of a headache by allowing people to order cabs in real time. He figures any technology that takes off here can scale elsewhere.