800-horsepower Mustang on the way 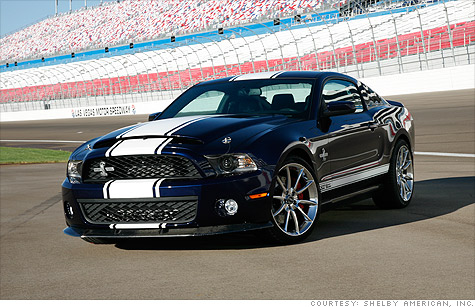 The 2012 Shelby GT500 Super Snake will be available with an upgrade kit enabling it to produce 800 horsepower. by Peter Valdes-Dapena, senior writerApril 7, 2011: 4:36 PM ET
Follow Peter on Twitter: @PeterDrives

NEW YORK (CNNMoney) -- An 800-horsepower version of the Ford Mustang will be unveiled at the New York Auto Show later this month.

While the base Super Snake will produce a mere 750 horsepower, those who feel the need for more power will be able to add an optional upgrade package that will provide 50 more. Shelby provides no warranty on the engine and transmission, in either case.

The base version of the outgoing 2011 Super Snake produces 630 horsepower, although no-warranty option packages have been available in recent months to push horsepower in those cars up to as much as 800, as well.

Prices for the 2011 Super Snake start about $80,000 in total, including the separate purchase of a car from Ford -- a factory-produced Shelby GT500 -- and the necessary modifications.

"Shelby American has a rich history at the New York International Auto Show," said John Luft, president of Shelby American. in an announcement. "The very first Shelby car was introduced there in 1962, as well as the 1968 and 2008 Shelby GT500KR and the 2006 Shelby Hertz GT-H."

The original partnership between Ford and Shelby American founder Carroll Shelby, one that resulted in Mustang-based performance cars that can be worth millions of dollars today, ended in 1969. Ford and Shelby entered into a new agreement in 2003 that has produced a new line of Shelby Mustangs, some built by Ford Motor Co. and others built at the Shelby American factory.

Help Desk
Track testing tires to find the best
Find out how TireRack tests and reviews tires and why choosing the right ones for your car is so important. Play
Markets
Data as of 11:35am ET
Data as of 2:44pm ET
Sponsored by
Sponsors
Sections