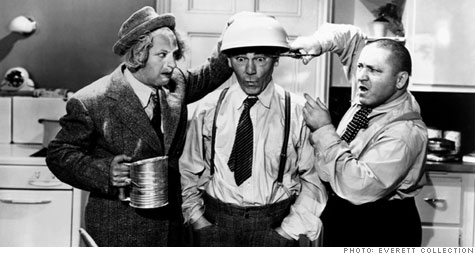 Lawmakers are behaving in ways that would earn them a time-out if they were in kindergarten.

Deficit hawk Bob Bixby, who runs the Concord Coalition, described the craziness masquerading as debate over this year's budget as akin to the Three Stooges knocking heads over a cigar.

"Moe, Larry and Curly are fighting in the back seat of the car. No one is in the driver's seat. As the boys settle down, Curly looks up and says, 'Hey, don't look now but we're about to be killed.' "

Bixby wrote that two weeks ago.

At the time, he was a little worried the analogy might have been too harsh. On Thursday, he said he wasn't worried about that anymore.

An eleventh-hour spending bill passed Friday is not likely to change Bixby's mind either, since "politicians can't stop squabbling over a few billion dollars from a small slice of the budget while our overall fiscal policy is headed for a cliff."

Instead, they have spent the past week issuing ever-snarkier comments about the other party's real intentions. And they have been making grandiose statements on the floor of the House and Senate about how it's the other side that will be responsible if the government shuts down.

That, of course, hasn't left them much time to attend to what are, by all measures, much more important matters.

For instance, they might do better to re-focus their energy on securing the country's fiscal future. That's a long-run proposition that will in no way be meaningfully advanced by passing another $10 billion or $20 billion in cuts.

Lawmakers will have to muster every ounce of energy and goodwill they have to hammer out a serious, comprehensive debt-reduction plan that will unfold over many years.

And that debate will have to start with the 2012 budget -- efforts on which should have been well under way by now, but which have been held up by the current 2011 fight.

Given the persistent push for spending cuts by the newest and most conservative lawmakers, that 2012 debate will now be tied to a vote over increasing the debt ceiling, which is the country's legal borrowing limit.

The Treasury Department estimates that it will be hit no later than May 16. The consequences for the economy if the ceiling isn't raised would be far worse than anything a government shutdown might yield because it would eventually cause investors to question U.S. creditworthiness.

But the disappointment of having to compromise on anything having to do with spending cuts in the 2011 fight may have poisoned the well for the debt ceiling vote and the upcoming 2012 debate.

"If they avert a shutdown [over the 2011 budget], conventional wisdom will say that the bullet was dodged. Au contraire. If the Tea Party types feel they were forced to compromise now, they will likely double down their obduracy on the debt limit, and again on the FY 12 appropriations. More end games, more threats, all year," said Norm Ornstein, a resident scholar at the conservative American Enterprise Institute.

Bixby has a slightly more optimistic take. He thinks because the consequences of not raising the debt ceiling are so damaging, lawmakers may actually engage in a more serious fiscal debate in the run-up to that vote than have in the 2011 fight. And they may strike a deal for at least one long-run fiscal measure that improves the country's debt outlook.

Then again, he doesn't expect there to be just one debt ceiling vote. A few is more like it.

Much like the seven temporary spending bills Congress has passed to keep the government funded up until now, Bixby expects there will be a series of debt ceiling increases -- each extending the limit for only short periods to put pressure on negotiators to strike a deal.

That means there could be a persistent sense of uncertainty about what lawmakers will do next.

Well, you can't say you haven't been trained for that marathon.

Debt ceiling to be hit by May 16

Time to get real on the debt ceiling