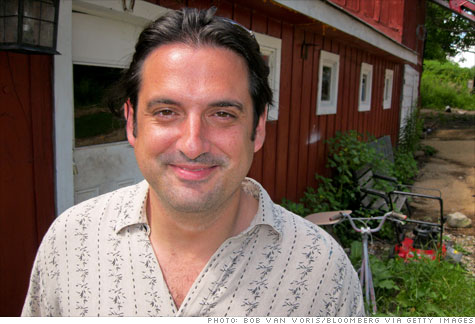 NEW YORK (CNNMoney) -- Paul Ceglia, a New York resident who sued Mark Zuckerberg last year for 50% ownership of Facebook, has re-filed his complaint with e-mails that he says prove his case.

The amended complaint, filed Monday in New York district court, alleges that Ceglia and Zuckerberg signed a contract in April 2003 that gives Ceglia half ownership of what is now Facebook.

The "work for hire" contract that Ceglia filed as evidence says he paid Zuckerberg $1,000 for development work on a site called StreetFax, and $1,000 for work on the site "the Face Book," which Zuckerberg had already started.

The alleged contract also says that Ceglia would own 50% of the "software, programming language and business interests" of Facebook. That contract was included in Ceglia's suit from 2010. (Click here to view the contract.)

Ceglia re-filed the suit on Monday with high-profile law firm DLA Piper, and he included several alleged e-mails between him and Zuckerberg from July 2003 to July 2004. The amended complaint was first reported by Business Insider.

"This is a fraudulent lawsuit brought by a convicted felon, and we look forward to defending it in court," said Facebook's legal counsel, Orin Snyder of Gibson, Dunn & Crutcher. "From the outset, we've said that this scam artist's claims are ridiculous and this newest complaint is no better."

In 2009, Ceglia was convicted of fraud in connection with a wood pellet company he owned.

What's in the e-mails: The purported e-mails started off mundane, with the two men weighing the possibility of charging a monthly fee for Facebook or entering into a licensing agreement with Harvard University.

But the correspondence devolved when Zuckerberg asked for more funding and a waiver of the ownership agreement, blaming the development delay on Ceglia's multiple requests for extra work on the StreetFax site.

"I'm starting to think you just blew that money Mark," read the response from Ceglia, whose grasp of grammar appears shaky. "You know perfectly well that you can't just take a persons investment and then spend it on women and beer or whatever you do up there in Harvard."

Ceglia then threatened to call Harvard and "perhaps your parents in Dobbs Ferry and let them know whats been going on."

A few weeks later, Zuckerberg complained about a clause in the agreement that entitled Ceglia to an additional 1% of Facebook for every day of delay after January 1.

"According to our contract I owe you over 30% more of the business in late penalties which would give you over 80% of the company," Zuckerberg wrote. "I'd like to suggest that you drop the penalty completely and that we officially return to 50/50 ownership."

Ceglia replied, in part, "OK fine Mark 50/50 just as long as we start making some money from this thing."

Thefacebook.com launched on Feb. 4, 2004. A few days later, according to the e-mails, Zuckerberg told Ceglia that he "must take creative control" and that he didn't want to publicize the site with flyers.

On April 6, 2004, Zuckerberg wrote that he had "become too busy to deal with the site and no one wants to pay for it, so I am thinking of just taking the server down."

Ceglia told Zuckerberg to "grow up, take a f---ing ethics class, choke yourself with that silver spoon of yours."

The final e-mail included in the suit was a July 22, 2004, mea culpa from Zuckerberg: "Paul, I am guessing that you don't want to talk to me but I wanted to say happy birthday and that I hope to resolve our differences. I see that what I did was wrong and I am really sorry that I behaved as I did..."

The complaint alleges that at the time of that e-mail, Zuckerberg "had received or was about to receive funding from angel investors and was in the process of meeting with venture capital funds to provide additional capital. At no time did Zuckerberg inform Ceglia of these facts."

The complaint goes on to accuse Zuckerberg of multiple types of fraud and misappropriation of assets.

Incidentally, one of the e-mails seems to reference the Winklevoss twins, who lost their own appeal against Facebook on Monday.

A November 2003 e-mail from Zuckerberg read: "I have recently met with a couple of upperclassmen here at Harvard that are planning to launch a site very similar to ours. If we don't make a move soon, I think we will lose the advantage."