How to rebalance your portfolio

By Walter Updegrave, senior editorApril 13, 2011: 11:00 AM ET
Sign up for the Ask the Expert e-mail newsletter

(Money Magazine) -- My wife and I are 35, have a good start at building our retirement funds, but we'd like to increase the percentage of fixed-income investments in our tax-deferred retirement accounts. How should we go about doing this? Should we rebalance all at once or slowly over time? --Chad Comer, Madison, Wisconsin

I'm going to give you two answers. 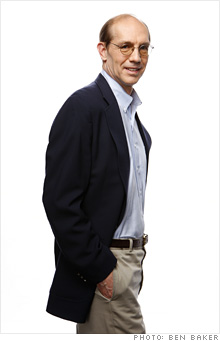 No, I'm not waffling. The first is the one that I think makes the most sense financially. But because I know from past experience that many people just find it hard emotionally or psychologically to act on the advice I'll give, I'm also going to give you an alternative that, while less than ideal in my opinion, may be more palatable -- and that will eventually get your portfolio to where you want it.

Before I get to those answers, however, I want to ask you to step back a moment and confirm to yourself that you're making this move for the right reason.

Rebalancing is something that you should do periodically to maintain a stocks-bonds allocation that's appropriate for you over the long term. The ups and downs of the financial markets will naturally re-jigger your portfolio's proportions as different investments earn different returns.

The idea behind rebalancing is to bring you back to back to your target mix. Occasionally, you may even decide to do the equivalent of an asset allocation "reboot."

In other words, maybe you've had a strategy in place, but have decided that it's not quite right for you. So you want to set a new stocks-bonds mix that you'll adhere to going forward -- and use as the baseline for future rebalancing. This is what I hope you have in mind.

But you don't want to use the term "rebalance" to justify short-term moves in and out of different investments. For example, if you're worried the stock market is about to take a dive and you load up on bonds with the intention of moving back into stocks when you feel better about the market, that is not rebalancing. That's market timing.

One other thing. You don't say how much you want to reduce your stock stake, but you want to be careful not to go overboard on bonds. You've got a good 30 years or so before retirement.

Generally that argues for a portfolio tilted fairly heavily toward stocks. For example, target-date retirement funds geared toward someone your age generally have between 80% and 90% of their assets in stocks. That's not to say you can't decide to be more conservative.

Just be aware that the more you shift toward bonds, the more upside potential you'll be giving up in return for more stability. You can get a sense of how different stocks-bonds combinations might perform by going to Morningstar's Asset Allocator tool.

By saying you want to move from 10% to 20% in bonds, you're really saying that you feel that the balance between risk and return in your portfolio leans too much toward the risk side.

Or, to put it another way, that you're willing to give up a shot at higher long-term returns for a less bumpy ride to retirement. If that's the case -- and if it isn't, you need to re-evaluate why you're doing this in the first place -- then it makes the most sense to do the shift now, all at once.

Why all at once? Well, to answer that question, let's think about the alternative, which is to move the $10,000 into bonds gradually, say, $833 each month over the course of a year. (For simplicity's sake, we'll ignore the effect of investment returns on getting to the new allocation.)

You've taken a year to get to the stocks-bonds mix that you feel is right for you. In other words, for an entire year, you've had a portfolio that is more aggressive than you really want.

So by transitioning to the new asset mix over time, you're really postponing (or perhaps more accurately, undermining) your decision to re-set the risk-reward balance in your portfolio.

I'm sure some readers are now saying, Yes, but what if stocks soar after I've made the switch. Haven't I given up gains I'd have earned if I'd moved my money more gradually?

And I expect others are saying, "But what if interest rates go up and bond prices go down right after I shift $10,000 into bonds. Wouldn't I have lost more money than if I'd transferred money bit by bit?"

The answer, of course, is that you would have been better off in both cases. But the whole point of asset allocation is that we don't know in advance what the stock or the bond market will do.

If we did, we wouldn't need to bother diversifying. By divvying up your money between stocks and bonds you're essentially saying that you can't outguess the markets.

And instead of trying, you're going to deal with the inherent uncertainty of the markets by choosing a stocks-bonds mix that's appropriate for you, and sticking with it.

There will always be times when, with the benefit of hindsight, you'll know that you would have been better off with more in stocks or more in bonds -- or, in the case of changing your allocation, moving more quickly or more slowly to a different stocks-bonds mix.

But we don't have the luxury of making investment decisions in hindsight. We've got to make them in real time. So the real issue here is deciding what risk-reward balance do you want to take with your portfolio now and going forward, and then settling on the stocks-bonds mix that reflects that trade-off.

To hem, haw, postpone or procrastinate about getting to that mix amounts to nothing less than second guessing yourself.

I suppose someone could come up with a rationale for not making the move all at once in a taxable portfolio.

If selling securities to get to the new allocation would trigger gains so large that you would be thrown into a higher tax bracket and face a humongous tax bill, then maybe a gradual move would make sense to spread out your tax liability.

Even then, though, you want to get to the right allocation as soon as you can. As I mentioned earlier, some people just can't (or won't) accept this rationale.

Whether for emotional or other reasons, they find it hard to make the move all at once (just as many people, wrongly as I've noted before, insist on dollar-cost-averaging even though it's a clunky and inefficient way to invest).

If you're among this group, that's where my second answer comes in, which is: Move it gradually, but try to make the transition as quickly as you can -- say, within six month rather than a year or, even better, over three months rather than six.

The downside to this approach is that there will still be a period of time when you're not at the target mix you've decided is right for you. But the upside is that you'll eventually get there. Which is certainly better than not making the shift at all.