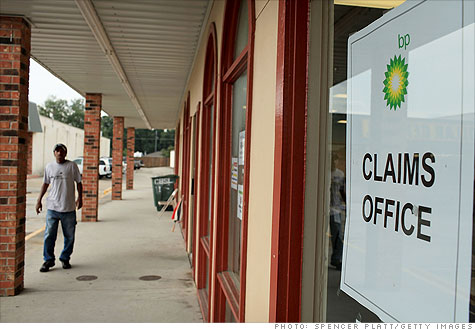 NEW YORK (CNNMoney) -- The fund established to compensate Gulf Coast residents in the aftermath of last year's massive BP oil spill said Monday it has paid out $3.8 billion so far.

The Gulf Coast Claims Facility, established last August with $20 billion in seed money from BP (BP), said it has approved 300,000 claims from businesses and individuals hurt by the spill, out of approximately 857,000 claims submitted.

The update comes two days before the one-anniversary of the BP disaster, which claimed 11 lives and spewed over 200 million gallons of oil into the Gulf -- the worst oil spill in U.S. history.

In the press release, the fund tried to defuse criticism that it has rejected too many applicants and that the awards have been far less than people hoped for.

"Amounts requested by claimants very often bear no reasonable relationship to the damages actually proven," the statement said, noting that one applicant tried to get all $20 billion.

It also noted that in the 574 cases where claimants disputed the fund's decision, the Coast Guard, the agency that arbitrates claim disputes, did not overturn even one decision.

The fund employs 3,200 people in five states and has 35 offices. It is independently administered by Ken Feinberg, a lawyer who helped distribute claims related to the Sept., 11 2001 attacks.

It will continue to pay claims until August 2013.

While it seems like the $20 billion may not be exhausted by 2013, analysts don't foresee BP getting any of that money back.

"It's like the tobacco money," said Douglas Youngson, an oil analyst at Arbuthnot Securities, a London-based investment bank. "It's now one big pot of cash, and it will get spent."

A BP spokesman said the company has actually paid out $5.6 billion in damages so far, including the money paid to local and state governments.

BP took a $40 billion charge to its balance sheet in 2010 to deal with the spill, a number that includes the $20 billion claim fund as well as clean up costs and any foreseeable fines resulting from the disaster.

The charge resulted in the company reporting a net loss of $3.7 billion in 2010, compared to profits of around $20 billion a year for each of the last few years.

BP's share price was halved in 2010, going from over $60 to under $30 a share, and the company eliminated its dividend. Talk even swirled that the firm, the world's fourth largest, could become a takeover target.

But the company's shares have since rebounded from last summer's lows and now trading around $45. The dividend has been partially reinstated.

Analysts expect the company to return to near-normal profitability in 2011, and have a median share target price of over $55.