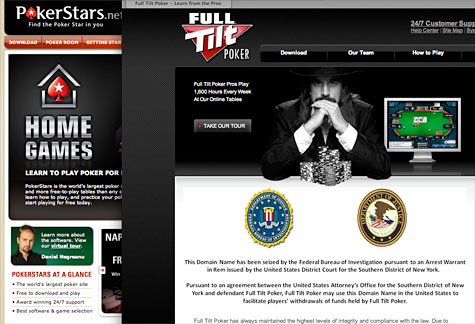 FORTUNE -- It's not often that opportunity arrives in the form of a federal indictment. But that's exactly what's happened in the world of online poker.

Online poker is currently illegal in the U.S. and, as a result, the $6 billion industry has developed overseas, catering to the wishes of millions of Americans playing from their homes in Ohio, California, Mississippi and every other state. That's crazy.

Earlier this month, the federal government cracked down on foreign online poker operations -- the FBI charged 11 people with fraud, including the founders of PokerStars, Full Tilt Poker, and Absolute Poker. That move has produced a unique opportunity to bring thousands of jobs home to America, to generate revenues that benefit Americans rather than foreign companies and to bring clarity to the current ambiguous set of federal laws. We should seize the moment.

The question we face isn't "will there be online poker?" Millions of Americans have already answered that question through their regular play, and the latest indictments won't change that. In fact, less than 24 hours after the three poker sites were closed, other foreign operators began filling the void.

Instead, the question is this: "Should we seize the moment to legalize online poker, permit a safe and legitimate industry in the U.S., and bring those jobs and revenues home?" Unequivocally, the answer is yes.

The current ban on Internet poker has many parallels with the Prohibition of the 1920s. Business is being diverted from legitimate, respected companies that employ thousands of people to fly-by-night, underground (and in this case, foreign) operations.

Just like Prohibition, consumers lose all of the protections that come with a government-regulated onshore business. And millions of otherwise law-abiding adult Americans are hamstrung by a law they disrespect and consider to be a barrier to a perfectly appropriate activity.

How to regulate it

Fortunately, there is considerable sentiment to repeal the ban on Internet poker, and legislation has been proposed at both the federal and state level. Unfortunately, however well-intentioned it may be, state level legislation will not adequately address the problems that currently exist.

To prevent criminal activity, sensible legislation should provide strict regulatory oversight and mandate the use of state-of-the-art technology to protect players from cheating, fraud and identity theft. It should also ensure the integrity of financial transactions by requiring operators to work with law enforcement to establish controls that prevent money laundering and fraud while protecting the privacy of players.

To protect consumers, the legislation should combat underage poker play by requiring the use of technologies currently deployed in other age-sensitive industries. It should mandate that operators offer state-of-the-art problem gambling controls, including limits on wagers, deposits, losses, and playing time. And it should also provide unprecedented federal funding for comprehensive problem gambling services.

To allow for better law enforcement, the legislation should close loopholes in U.S. law and impose clear and unambiguous penalties on illegal sites that cater to U.S. players. It should also require strict licensing and close regulation of licensed Internet poker sites and put the brakes on individual state efforts to push the Internet gambling envelope.

In short, this bill should recognize the reality of the world we live in, protect the interests of law-abiding citizens who want to play a little poker from the privacy of their homes, create thousands of new jobs, and produce millions of dollars in new economic activity. And it should acknowledge that as a game of skill, poker deserves to be treated differently than other forms of gambling.

From an economic standpoint, if Congress were to clarify the law on Internet poker, the biggest winners would be the states. That's because the legislation being considered would give states the opportunity to share in the growing global online market, and in so doing, generate millions in new revenues to help prevent tax increases, cuts in education, law enforcement, care and other critical services.

One day, we'll look back at 2011 and laugh at the folly of a ban on Internet poker -- just like we now think about Prohibition. The sooner that day comes, the better.

Gary Loveman is the CEO and president of Caesars Entertainment.