Stocks: All eyes on Bernanke 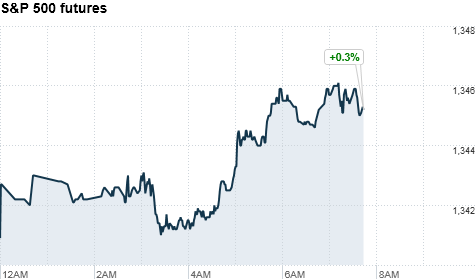 NEW YORK (CNNMoney) -- U.S. stocks were headed for early gains Wednesday, as investors sort through the latest corporate results, ahead of a highly anticipated press conference at the Federal Reserve.

U.S. stocks finished at their highest levels in three years Tuesday, as investors cheered another batch of solid earnings and a better-than-expected report on consumer confidence.

Investors will turn their attention to tight-lipped Federal Reserve Chairman Ben Bernanke's first of what will become four regular press conferences a year.

In the past, Bernanke has rarely taken journalists' questions publicly. The speech and question-and-answer session will follow the Fed's two-day meeting on monetary policy.

While the Fed's Open Market Committee is not expected to raise interest rates, investors are hoping to get some sense of how soon the central bank could move to tighten its easy money stance.

"The press conference is really the key, and will set the tone in terms of the short and medium-term duration of interest rates," said Peter Cardillo, chief market economist at Avalon Partners. "I think the market will trade in a tight range until we get the FOMC and the press conference out of the way."

Meanwhile, the market is also getting a boost from $21 billion merger in the health care sector, while results from a handful of big companies came in mixed. But the tone was tempered by a warning from S&P that Japan could be at risk for a downgrade.

Why the Bernanke show is beside the point

Companies: Johnson & Johnson (JNJ, Fortune 500) said it will buy Synthes, a Swiss maker of orthopedic devices, for $21.3 billion. Shares of J&J eased about 1% before the opening bell.

Shares of Dow component Boeing (BA, Fortune 500) edged higher in premaket trading after the aeronautics company said it earned 78 cents per share in the first quarter, up from 70 cents a year earlier. Analysts were expecting 70 cents per share, according to Thomson Reuters.

BP (BP) reported first-quarter earnings of $1.75 per U.S.-listed share, down from $1.79 per share in the year-ago quarter. The British oil company was expected to report $1.82 per share.

After the close, Starbucks (SBUX, Fortune 500) reports results. The coffee retailer is expected to earn 34 cents a share.

Economy: The government said new orders for durable goods increased 2.5% in March, after a 0.7% rise the month before. Economists surveyed by Briefing.com expect an increase of 1.8% in March.

World markets: European stocks higher in midday trading. The DAX in Germany was up 0.7% and France's CAC 40 rose 0.5%, while Britain's FTSE 100 was flat.

Asian markets ended mixed. The Shanghai Composite and the Hang Seng in Hong Kong both fell about 0.5%, while Japan's Nikkei rallied 1.4%.

Standard & Poor's warned that Japan's government could face a downgrade of its credit rating within the next few years as the nation's economy recovers from the March 11 earthquake and tsunami.

S&P lowered its outlook on Japan's long-term debt to "negative" from "stable," saying the government will likely bear most of the cost of rebuilding. The ongoing struggle to contain a damaged nuclear power plant in Japan makes the outlook even more uncertain, the agency said.

Bonds: The price on the benchmark 10-year U.S. Treasury held steady, with the yield unchanged from Tuesday at 3.32%.