Wal-Mart: Our shoppers are 'running out of money' 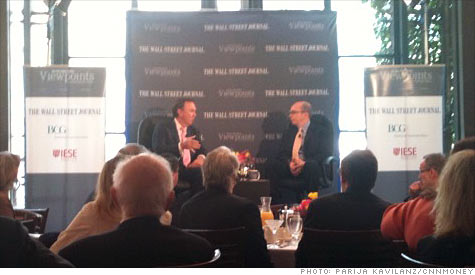 NEW YORK (CNNMoney) -- Wal-Mart's core shoppers are running out of money much faster than a year ago due to rising gasoline prices, and the retail giant is worried, CEO Mike Duke said Wednesday.

"We're seeing core consumers under a lot of pressure," Duke said at an event in New York. "There's no doubt that rising fuel prices are having an impact."

Wal-Mart shoppers, many of whom live paycheck to paycheck, typically shop in bulk at the beginning of the month when their paychecks come in.

Lately, they're "running out of money" at a faster clip, he said.

"Purchases are really dropping off by the end of the month even more than last year," Duke said. "This end-of-month [purchases] cycle is growing to be a concern.

Wal-Mart (WMT, Fortune 500), which averages 140 million shoppers weekly to its stores in the United States, is considered a barometer of the health of the consumer and the economy.

To that end, Duke said he's not seeing signs of a recovery yet.

With food prices rising, Duke said Wal-Mart is charging customers more for some fresh groceries while reducing prices on other merchandise such as electronics.

Wal-Mart has struggled with seven straight quarters of sales declines in its stores.

Addressing that challenge, Duke said the company made mistakes by shrinking product variety and not being more aggressive on prices compared to its competitors.

Wal-Mart's ready to do battle on prices

"What's made Wal-Mart great over the decades is 'every day low prices' and our [product] assortment," he said. "We got away from it."

Now, with its strategy of low prices all the time back in place, Duke said making Wal-Mart a "one-stop shopping stop" is a critical response to dealing with the rising price of fuel.

Americans don't have the luxury of driving all over town to do their shopping.

Other than competing on prices and products, Duke said Wal-Mart is focused on leveraging technology -- especially social networking -- more aggressively to drive sales.

"Social networking is much more a part of the purchasing decision," he said. "Consumers are communicating with each other on Facebook about how they spend their money and what they're buying."

Elsewhere, Duke said Wal-Mart is exploring a number of e-commerce initiatives to grow the business such as testing an online groceries delivery business in San Jose.