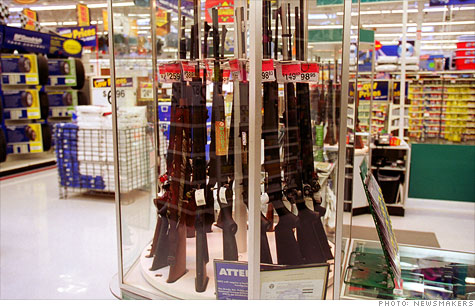 After sharply cutting back on the number of stores that sold guns in 2006, Wal-Mart says they'll be available again in about half its stores. By Parija Kavilanz, senior writerApril 28, 2011: 1:24 PM ET

NEW YORK (CNNMoney) -- Wal-Mart said Thursday that it is bringing guns back to many of its U.S. stores in an effort to lift slumping sales.

In 2006, Wal-Mart (WMT, Fortune 500), the world's largest retailer stopped selling guns in the majority of its stores, blaming slow demand for those types of firearms.

Wal-Mart currently sells rifles, shotguns and ammunition in about 1,300 stores in the United States.

Those firearms will now be available at about half of Wal-Mart's 4,000 stores.

The retailer doesn't sell handguns in any of its stores, other than in Alaska.

After suffering seven straight quarters of falling sales, Wal-Mart says that it is adding more merchandise variety to stores and becoming more aggressive on prices versus its competitors.

Lopez said Wal-Mart is focusing on stores in areas where hunting and fishing are popular activities.

'We realized there is broader appeal for guns in some areas because of sporting needs," said Lopez.

He also said that the majority of the firearms sold at Wal-Mart are made in the United States.

Lopez said consumers will have to complete appropriate forms and background checks before they can buy guns at Wal-Mart.

Wal-Mart's shoppers running out of money