Panetta's mission: Can he cut the Pentagon? 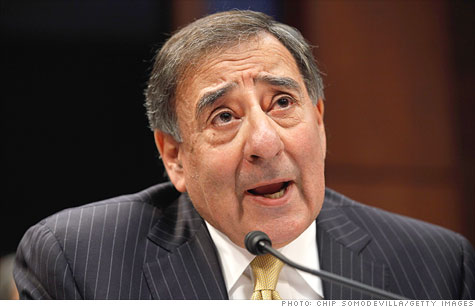 Leon Panetta brings a long experience with the budget to his job as defense secretary. By Lawrence Korb and Laura Conley, CNNMoney guest columnistsApril 28, 2011: 3:42 PM ET

NEW YORK (CNNMoney) -- Lawrence Korb, a former assistant secretary of defense the Reagan administration, is a senior fellow at the Center for American Progress. Laura Conley is a research associate at the center.

On Thursday, President Obama named Leon Panetta to take the top post at the Pentagon in July.

Currently CIA director, Panetta has a long track record working on the federal budget in Congress and the White House. In an age of budget cuts, it is hard to think of a person who has brought a better background to the job of running the giant Defense Department.

Panetta will have to get right down to work. He'll immediately face three critical challenges: Delivering on Obama's promised cuts in security spending, maintaining fiscal sanity during three wars and managing the often contentious debate between the Pentagon and Congress.

Obama said this month that he wants to reduce security spending by $400 billion by 2023. And the Defense Department is by far the largest and most costly of the security-related agencies that will be put under the microscope. (How Washington wrecked the federal budget)

In this age of fiscal austerity, we are now spending significantly more in constant dollars on defense, meaning both the baseline Pentagon budget and war funding, than at any time since World War II. The baseline budget alone is $100 billion higher than the Cold War average.

This inflated level of spending is a result of reckless growth in the defense budget since the Sept. 11 attacks nearly a decade ago. There is plenty that can be trimmed from the $700 billion-plus spent annually on the military.

Panetta's challenge will be to ensure that the Defense Department makes some politically difficult cuts. Some examples:

--Military pay, which consumes an increasing share of the budget;

--Enormously expensive weapons programs such as the F-35 joint strike fighter, which is way over budget, and the aircraft carrier, which deals with threats from a bygone era.

Panetta will also confront the challenge of managing essentially two budgets: the baseline, or regular, defense budget, and the war supplemental.

The Bush administration regularly funded the wars in Iraq and Afghanistan through separate bills outside the regular budget calendar, a process that obscured the truly astronomical amount of annual defense spending and offered opportunities for Congress and the administration to fund additional programs, such as the F-22 and missile defense, that had little or no relevance to the wars.

Obama has submitted his recent requests concurrently, which makes it easier to understand the true cost of national security. Panetta should continue this practice, even in the face of new operations in Libya.

Finally, Panetta will have to deal with a Congress that is likely to oppose many of his reductions. This is especially true of the Republican-controlled House.

Any cuts the administration proposes, no matter how carefully tailored to meet the nation's strategic needs, can be rejected by congressional appropriators. While this oversight function is important, lawmakers too often seek to protect home district jobs in the name of national security by continuing costly programs that the Pentagon no longer wants or needs.

A prime example of this trend is the extra engine program for the F-35 joint strike fighter -- something that Congress has repeatedly attempted to fund over the objections of the Pentagon leadership. Panetta will need to manage relations with Congress carefully and take the case for sensible defense cuts not just to Capitol Hill, but also to the American people.

Panetta undoubtedly has the skills and experience needed to begin to tackle these three challenges. His past work as the director of the Office of Management and Budget in the Clinton administration should give him the credibility and capability needed to make tough choices in military spending.

And his time spent as a member of Congress, White House chief of staff and chairman of the House Budget Committee should position him well to understand the difficult dynamic between the Pentagon and Capitol Hill.

Finally, his experience at the CIA will help him to prioritize the real threats to U.S. security and ensure that defense programs deal with them in a cost effective way.

Even with this resume, however, managing the Pentagon in this difficult economic climate will be a challenge. To succeed, Panetta will need an excellent team behind him at defense, strong backing from the White House and a great deal of political courage.

What's wrong with how we budget war