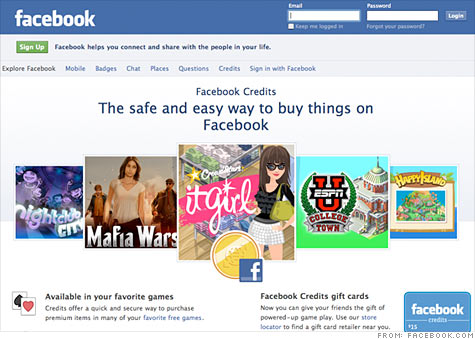 NEW YORK (CNNMoney) -- With more than 500 million active users, the population of Facebook exceeds that of many countries. And like any empire, Facebook has its own currency -- one that got a big boost with this week's launch of Facebook Deals.

Facebook's new daily deals offering, available in five cities now with plans to expand to more, puts it into direct competition with Groupon and its army of imitators. Facebook members will get deal offers right in their news feed -- and if one catches their eye, they can pay for it with a credit card, PayPal or Facebook Credits.

It's the first time Facebook's virtual currency can be used to buy real-world goods.

"Those folks now have the money to buy a massage or a meal," says Dave Martin, senior vice president of media at online marketing agency Ignited. "Beyond the simple idea of renting content, now you're actually getting durable goods."

Facebook is careful to note that its deals are still an ephemeral good: What customers actually buy is a voucher, which can then be exchanged for the featured item or service. But Facebook Deals are still a significant step up from virtual FarmVille crops or digital pets, the more traditional merchandise bought with Facebook Credits.

Facebook began testing its internal currency system in mid-2009 and rolled it out site-wide last year. By this July, it will require all social game developers to accept payment through Facebook Credits. Developers won't be forced to rely solely on Credits -- they can still accept eBay's (EBAY, Fortune 500) PayPal and other systems -- but Facebook offers incentives to those who stick with its system.

"There are a lot of people who use Credits regularly," she says. "Incorporating it was smart for us."

It could also prove very lucrative. When customers pay for items with Credits, Facebook typically passes 70% of the revenue on to the merchant or developer and keeps 30% for itself.

For buyers, Credits generally cost $1 for 10, but purchasing in bulk gets you a discount. For example, buying 4,720 Facebook Credits costs $400 -- an 18% bonus. Target and other retailers sell Credits gift cards.

Since Facebook is privately held, it doesn't disclose its financial details, but analysts suspect that Facebook Credits are growing into a sizeable economy.

An upcoming report from Social Times Pro, a research firm that specializes in scrutinizing Facebook, estimates that $600 million will pass through the Facebook Credits platform in the 12-month period that starts in July 2011.

According to James Au, who is working on the report, that projection is now relatively conservative, thanks to this week's Facebook Deals announcement.

"Facebook's goal is to drive a rich ecosystem around credits on multiple fronts," says Justin Smith, founder of Facebook news and research firm Inside Network. "Credits represent one of their major strategies to get into consumer payments."

Nick O'Neill, who founded All Facebook -- another site devoted to the inner workings of Facebook -- says the company is positioning itself as a player in the fast-evolving mobile payments market.

That field is a scrum. Online payments giant PayPal is fighting to stay on top; upstarts like Venmo are searching for a toehold; Goliaths like Visa and Mastercard want to elbow in; and Apple (AAPL, Fortune 500) and Google (GOOG, Fortune 500) want to carve off a piece of the payments flowing through their mobile gadget platforms.

"That space is being disrupted and they want to be an early player," O'Neill says of Facebook's ambitions. "The long term objective is to have the same reach they have with identity with payments."

Can Facebook pull that off and essentially build its own virtual economy?

Analysts point out that the company has 500 million chips already in its corner.

"The social graph that Facebook has built is really valuable," Smith says. "Facebook has really good identity info that users share about themselves. We're still early in the world of e-commerce and finance."

How Facebook Deals differs from Groupon, other coupon sites

5 ways to pay right now with your mobile phone