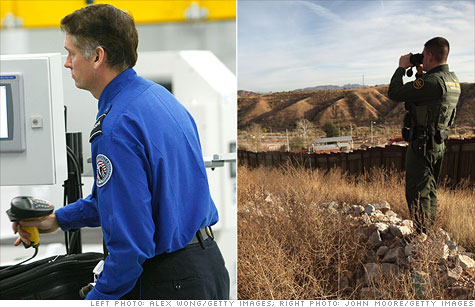 NEW YORK (CNNMoney) -- In the decade between Sept. 11, 2001, and the death of Osama bin Laden on Sunday, the U.S. government has spent hundreds of billions of dollars with the aim of making Americans safer.

The spending started quickly. Within a week of the Sept. 11 attacks, lawmakers approved an emergency $40 billion to bolster national defenses and pursue international terrorists. (Who gets the bin Laden bounty?)

At the forefront of this broad expansion was the Department of Homeland Security. Twenty-two federal agencies were consolidated under the control of one director, with the singular mission of stopping terrorist attacks.

Over the decade, the department alone has spent more than $424 billion. Today it employs 216,000 people.

In its first full budget after the attacks, the Bush administration proposed a funding level of $37.7 billion for the new agency. By 2008, its funding would rise to $50.6 billion.

And the eye-popping totals don't even count money from other parts of the budget used for domestic security.

A total of $71.6 billion will be spent on homeland security in 2012, according to Obama administration projections.

For comparison, that is more spending than the 2009 gross domestic product of 132 countries, including Iraq, Croatia and Cuba.

Of course, while homeland security spending was blasting through the roof, the Pentagon -- busy prosecuting two wars -- was getting a huge boost of its own.

Since 2001, defense spending has just about doubled, rising to almost $700 billion in 2010. That is more than half of the discretionary budget and about 20% of the entire federal budget.

At home, Washington's policymakers built a giant new bureaucracy to focus on border security, dirty bombs, homegrown extremists and the threat of another al Qaeda strike.

And Congress wasn't shy about giving the Department of Homeland Security and other agencies exactly what they wanted.

"Nobody wanted to be perceived as sitting on their hands after September 11th," said Chris Hellman, senior policy analyst at the National Priorities Project, a group that studies the federal budget.

According to Travis Sharp, a research associate at the Center for a New American Security, it was "very rare" to see members of Congress question funding requests.

"Lawmakers largely served as a rubber stamp for any budget that had to do with security," Sharp said.

While lawmakers pumped trillions of dollars into war funding and domestic security, they made no effort to offset costs by raising taxes or cutting spending in other areas.

But lawmakers didn't just increase security spending. After a brief few years of budget surpluses at the end of the Clinton administration, lawmakers opened the new century by blowing a hole in the budget with major tax cuts and spending programs.

Congress approved and then expanded the Bush tax cuts, then moved on to establish new prescription drug benefits for seniors on Medicare. The decade closed with a flurry of bailouts and financial stimulus packages that cost trillions.

Today, the debt stands at more than $14 trillion, a number that is setting off alarm bells in Washington.

As a result, both security and military budgets might soon face cuts as lawmakers, and even President Obama, seem to have caught budget-cut fever.

Already, the DHS budget has leveled off, stabilizing around $45 billion annually.

"We've gotten to a point where we think throwing more money is not going to solve the problem," said Hellman. Still, bin Laden's death a decade after Sept. 11 underscores the difficulty of counter-terrorism operations.

Plus, the United States has surely foiled plots along the way, even if they have gone unreported. That's an oft-cited argument for justifying homeland security spending.

"It's the loophole through which you drive trucks," Hellman said.