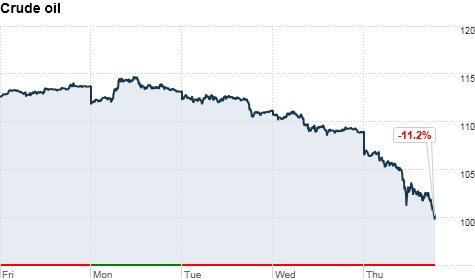 The broad underlying fear is that the U.S. economy is slowing down, and traders have a slew of data to back that theory.

On Thursday, a government report showed the number of people filing first-time unemployment claims surged to 474,000 in the latest week -- its highest total in 8 months. That means less demand for oil products because if you don't have a job, chances are you're trying conserve on gas and other energy costs.

Adding to the selling pressure was a strengthening U.S. dollar. The greenback gained 1.5% against the euro after the European Central Bank president Jean-Claude Trichet left Europe's interest rates alone and said they weren't likely to change in the near term, despite inflationary pressures.

That sent the dollar soaring and a stronger dollar tends to drive down crude prices because oil and other commodities are priced in the U.S. currency.

"It's like the commodity bubble burst," Daniel Flynn, an energy trader at PFG Best said. "We knew it was going to happen, but didn't know it would be this fast and furious."

The drop has been dramatic. Crude opened the week at $113.89 a barrel, and has declined in each trading session, for an aggregate loss of around 10% in just four days.

"This entire week has been absolutely crazy," Flynn said.

And it's not over yet. On Friday, the government will release its monthly report on jobs. A weak number there has the potential to drive prices down even further.

The drop hasn't translated into lower gasoline prices though. The national average price for a gallon of gasoline rose for the forty-fourth straight day to $3.985 on Thursday, according to motorist group AAA.