In Florida, It's retirees versus Latinos 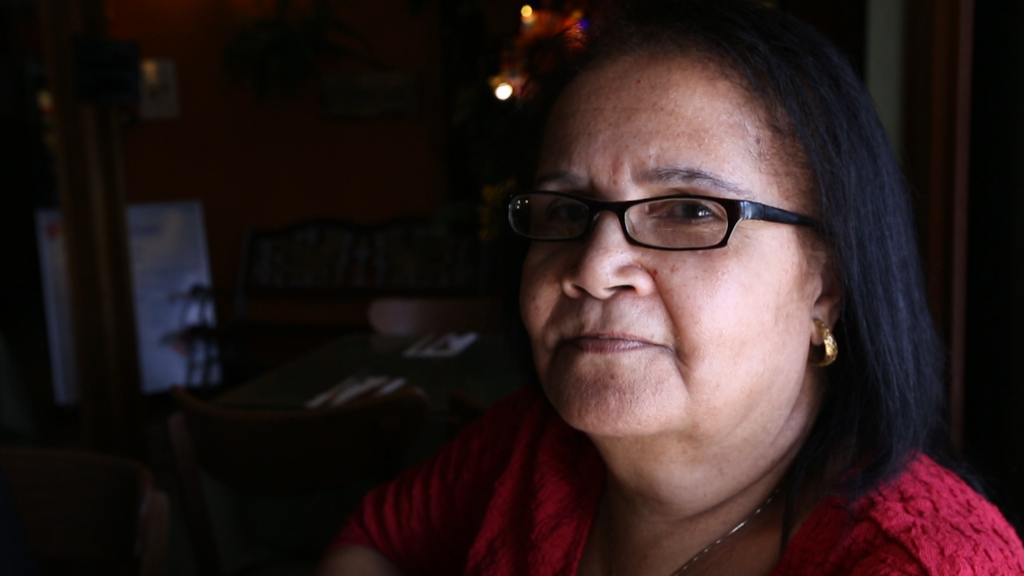 Florida Seniors vs. Hispanics: Who will turn out to vote?

For the first time ever, John Hernandez won't vote on Election Day.

Hernandez, a Puerto Rican in his 50s, lives near Disney World in Florida. He views Donald Trump and Hillary Clinton a lot like Mickey Mouse: an act.

"This election is just a game," Hernandez told CNNMoney while out for lunch in early September with his wife of 33 years. They sometimes held hands across the table. "Honesty, integrity ...I don't see that right now."

Florida went for President Obama in 2012 -- but just barely, with the tightest margin of any state. Since then, two populations have ballooned: retirees and Latinos, especially Puerto Ricans. Retirees lean Republican, while Latinos lean Democratic. The voter bloc that comes out stronger will likely sway the election.

CNNMoney stopped at Puerto Rico's Cafe in Kissimmee, Florida, for lunch. It's in the heart of central Florida, an area known as the "I-4 corridor" that runs from Daytona Beach through Orlando to Tampa. It's the swing region of this battleground state, yet no one we met at the cafe was voting for Trump.

"I think he is a clown," said Elise Agosto, an administrative assistant and grandmother of two.

Trump has struggled with Latinos ever since he called Mexican immigrants "rapists" in the early days of his campaign and championed building a wall between the U.S. and Mexico. Trump attempted to soften his image by traveling to Mexico in August. Hernandez calls it "a stunt."

So are Puerto Ricans a slam dunk for Clinton? Hardly. Of the eight people we spoke with over mofongo dishes, three aren't sure they'll vote. Hernandez and Agosto are among the uninspired.

Hispanics account for 18% of Florida's adult population that's eligible to vote, but they make up under 15% of the state registered voters, according to Pew Research. It's a gap the Clinton campaign is trying to close. After all, the 2000 presidential race in Florida -- the year of the "hanging chad" -- was decided by just 537 votes. (And Obama's 2012 victory was by only 74,000).

Clinton has a heavy ground game in the Sunshine State to register -- and motivate -- Latino voters like Noel Miranda. He moved to Florida a few months ago, fleeing the economic disaster in Puerto Rico. The island is deep in debt and has been in recession for nearly a decade.

At age 20, this will be his first presidential election. He liked Bernie Sanders because paying for college is a hardship he faces every time he looks at his bank account. Currently, Miranda makes pizzas at a restaurant in order to save up enough money to continue his computer science degree.

"Bernie's not in the race so the second option that I have is Hilary Clinton because I definitely don't want to see Donald Trump as president," Miranda told CNNMoney.

Puerto Ricans are American citizens. They can't vote for president on the island, but they can sign up easily once they move to the mainland United States. About 1,000 Puerto Rican families have been moving to Florida every week, according to some estimates.

Counties in central Florida like Orange and Osceola have seen their Puerto Rican populations double in the past decade, notes Aubrey Jewett, associate professor of political science at the University of Central Florida. Clinton needs minority voters to come out strongly for her to counterbalance the right-leaning retirees who are steadfast voters, rain or shine.

CNNMoney: All market metrics point to Clinton win, except one

Mike Collier doesn't fit the stereotypes of a Trump supporter: the blue collar workers fearful for their jobs or what Clinton called "deplorables." Collier is a Vietnam veteran who went on to a long career at Xerox. Now retired, he and his wife live in a home in a gated community in sunny Sarasota. Life is good. You can find him on a boat most weekends.

"I believe the current administration failed us," he told CNNMoney. He thinks Obama has run up the debt, failed to reinvigorate the economy and weakened America's leadership abroad. "When I look at [Trump's] history, he's been a winner. I think he's a patriot."

Many predicted the Republican primary in Florida would be close. Marco Rubio -- Florida's own senator -- was facing off against Donald Trump. Instead, Trump crushed Rubio, winning by over 440,000 votes. Some of Trump's biggest margins of support came from wealthier communities such Siesta Key, where Collier lives.

"It really scares us that we're staring at $20 trillion in debt, not knowing how our grandchildren will repay it," says Bob Kuck, a neighbor of Collier's. While Trump's tax plan is projected to shoot up the debt, Kuck believes Trump will surround himself with good advisers in the White House and enact a better plan. He likes Trump's business acumen.

His wife, Linda Kuck, agrees. She was born in Canada but immigrated to the U.S. legally and became an American citizen. She thinks Trump is right to take a hard stance on immigration.

"It just seems to me that a law is a law for everyone. That's where I stand," she said.

Still voting for Trump, even after "p-word"

These retirees don't love Trump. They were aghast at some of Trump's statements, even before the "Access Hollywood" video from 2005 surfaced where Trump made lewd and sexually aggressive comments about women.

"I frankly was rather appalled at Trump initially. I think his personality is awful," Alice Stonaker told CNNMoney in September. But she's still voting for him now because she thinks Clinton is worse.

The Kucks feel the same way. They see a vote for Trump as the "anti-Hillary" vote.

In the end, it comes down to policies. These retirees think Clinton will balloon the government and stack the Supreme Court with liberal judges. In fact, all 12 Trump supporters in Florida that CNNMoney spoke with in September still plan to vote for him now despite the "p-word" video.

Bob Stonaker, Alice's husband, calls this the "most pivotal election of our lifetime." He thinks it could mark the end of the Republican Party if Clinton gets elected and gives millions of illegal immigrants citizenship.

"That will ensure that we will continue to have a liberal culture forever," he said. "They'll feel like they're indebted to the liberal party, to vote Democrat." 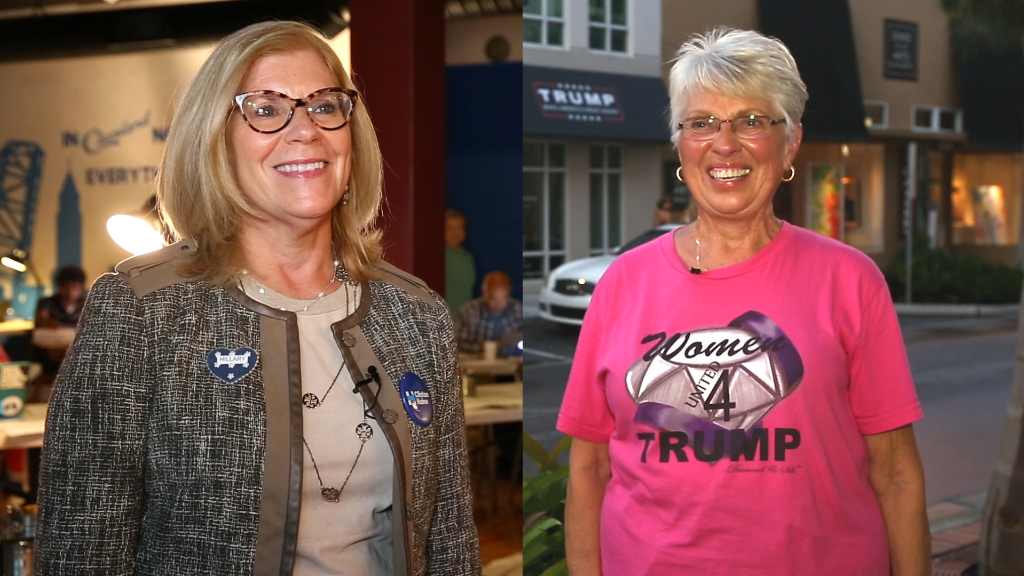 Head to head: Women for Trump and Clinton make their case.

Cuban-Americans are no longer 'reliably Republican'

Perhaps nowhere in Florida is the state more divided than Cuban-American families. For years, the Cuban-American community was reliably Republican. Senator Rubio is a poster child of that strong voting bloc. Many of these voters fled Cuba for the U.S. and shunned anything that looked remotely like socialism in America.

But their children and grandchildren are not as tied to the GOP: 44% now lean democratic, twice as many as in 2002, according to Pew Research.

CNNMoney spent the evening with four generations of the Garcia family in their ranch-style home in the Orlando suburbs. A map of Cuba hangs prominently in their TV room above the couch.

Miguel and Maria Garcia -- also known as "grandpa" and "grandma" -- were born in Cuba but fled to the United States in the 1960s. They call themselves independents, but they have traditionally gone Republican.

"I honestly don't trust [Hillary]," Maria Garcia told CNNMoney on a couch surrounded by her children and grandchildren. "My problem is...Cuba is a communist country. Anything that turns a little bit to the left, I have a problem with that."

Maria Garcia's two grown daughters, however, have a very different view of politics and this election. They are enthusiastic supporters of Clinton.

"My mom thinks Democrats are Communists, We're like one step away from being Communist when there's a Democratic administration," Carmen, one of the daughters, jokes.

Related: This key issue could tip the election

Is Trump a true Republican?

Carmen and her sister Delia, in their early 40s, see Clinton as the clear choice because of her experience and her vision, especially for affordable college education and pre-school for all children. Both college educated, they want to ensure all children in America have the same opportunities they did.

"Donald Trump, I could have 100% agreement on issues and I don't think I could vote for him just in terms of the things the he has said about people and how he's treated people," says Carmen. It's "just a human decency factor."

Maria and Miguel aren't sure what to do. They are the kind of people who offer you drinks and Cuban pastries as soon as you walk in the door. They think the way Trump talks is "denigrating" and that he isn't even a true Republican. They also laugh at his plans to possibly open a hotel or another business in Cuba.

"Trump is going to lose his hotel in Cuba," Maria says. Trump hasn't managed to open anything there yet, but if he does, Maria predicts the Cuban government will seize it. Despite their dislike of Trump, Maria and Miguel aren't sure they can join the younger generation in a vote for Clinton.

Maria's mother, who is 97 and plans to go to the polls, isn't nearly as conflicted. When asked, she said simply, "Trump es loco!"

Who will woo the undecideds?

In the end, Florida will likely come down to the last-minute decisions of voters like Lizbeth Martell. Almost a quarter of Floridians are registered as "no party." She's one of them.

Her family owns Puerto Rico's Cafe in Kissimmee. She's grown up working there since she could walk. It's open every day of the year except Thanksgiving. Martell is also a successful realtor, often serving central Florida's exploding Puerto Rican population that comes from both the island and New York.

Martell has some views than lean Republican -- she thinks too many people get government handouts -- and some that lean Democratic -- she's a strong supporter of public education and has a daughter who is studying to become a teacher.

"I don't agree with paying a McDonald's employee $15 an hour, personally," she says. "They don't deserve it."

At first, Martell was excited about the possibility of a businessman as president or the first female president, but now she's "very unhappy" with both.

Like many Americans, she feels this year is about voting for the candidate who will "do the least harm." She's considering a vote for a third party candidate for the first time but hasn't made up her mind.