Exxon Mobil again tops Fortune's list of top earners. Which other companies are among the most profitable on the planet? 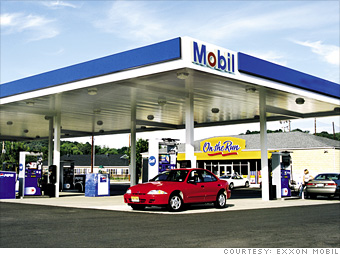 Sky-high oil prices have led to extraordinary profits for Exxon Mobil, with $40.61 billion in earnings last year, or nearly $78,000 per minute. That topped its previous record of $39.5 billion in 2006.

Known as the "project masters" for getting things done on time and under budget, the world's most profitable company has stayed ahead of the pack with a surge in exploration and drilling in risky corners of the world like the Middle East and Africa.

Still, production declines in the last few quarters have raised concerns about the company making the right investments for the future.

Which industries rule?
The banking industry saw the biggest sales increase, while the airline business saw the biggest jump in profits, with earnings surging 118%. (more)