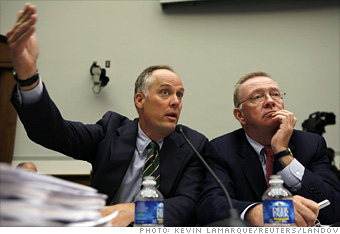 Fannie CEO Daniel Mudd (left) and Freddie CEO Richard Syron
Fannie chief Daniel Mudd and Freddie CEO Richard Syron aren't exactly setting the world on fire. Both execs were brought in several years ago to overhaul risk management after accounting scandals forced multibillion dollar restatements at the companies. But Fannie has only recently become current in its regulatory filings, and Freddie only just completed Securities and Exchange Commission registration of its stock - steps they agreed to take earlier this decade to bring their disclosures in line with other public companies. That delay may have led Freddie to postpone a plan to raise $5.5 billion in capital - a decision that looks disastrous in light of the recent plunge in the companies' shares.