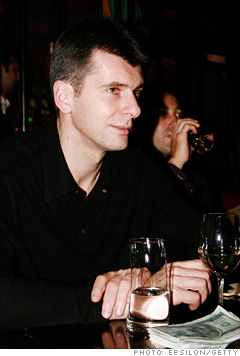 Perhaps the wildest child of the oligarch set, Prokhorov gained international notoriety when he was arrested at the French ski resort Courchevel in January 2007 and held in connection with a prostitution investigation. Prokhorov was released and cleared, but a spokesman has said that he won't do any business in France until he gets an apology. Prokhorov fell out with partner Vladimir Potanin shortly after the scandal, and their relationship - which further curdled when Prokhorov sold a stake in Norilsk Nickel to Oleg Deripaska - has never recovered.

Next up for his Onexim Group holding company is nanotechnology. Earlier this year Prokhorov reportedly dedicated $150 million to media endeavors, one of which, he announced, is a sort-of Facebook with the acronym SNOB, for Russian millionaires, along with a similarly branded magazine and television property. And who can forget his personal blog, which offers counsel on, among other things, fitness regimens for youngsters? (He suggests nonprofessional acrobatics for 5- to 8-year-olds.)