Sparks still fly in a recession

Never mind the headlines -- for some fireworks companies, there's no slump. 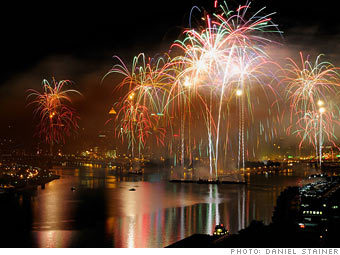 Pittsburgh's 250th anniversary celebration
Fireworks have been a hallmark of July 4th festivities since the first Independence Day celebration in 1777, and this year should be no different. True, some smaller cities -- including Colorado Springs, Lowell, Mass., and Reno, Nev. -- have canceled their shows due to financial concerns. But this year's Macy's Fourth of July Fireworks Spectacular promises to be more spectacular than ever in honor of the 400th anniversary of Henry Hudson's arrival in New York, and executives of fireworks companies throughout the country say business is healthy.

Zambelli Fireworks Internationale produced over 2,000 shows last July 4th weekend and has added new shows this year in such cities as Philadelphia and Albuquerque. And that's in addition to the 1,500 more the company does throughout the year, including an October display to commemorate Pittsburgh's 250th anniversary (shown), which set the U.S. record for most fireworks launch sites at 17.

But that doesn't mean the company hasn't felt the economy's impact: While Zambelli has traditionally grown between 10% and 15% each year, its growth rate has stalled to only a few percentage points this season.
By Josh Glasser, contributor
NEXT: Local impact
Last updated July 08 2009: 5:12 PM ET
Email | Print | Share  |  RSS