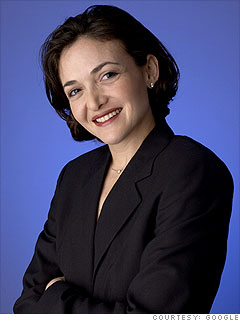 COO
Facebook
2008 rank: 34
Age: 40
Facebook has grown up under Sandberg, who in her previous job built and oversaw global sales and operations at Google. Facebook works with 83 of the top 100 ad spenders in the U.S. and boasts 250 million users and counting. Facebook director Marc Andreessen has estimated that the privately held company will surpass $500 million in revenue this year.