Fortune commissioned a statistical analysis of blogosphere chatter to discover which chiefs of Fortune 500 companies garnered the most buzz this year, good and bad. 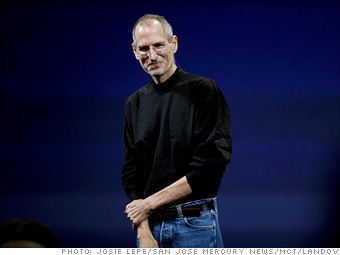 It should come as no surprise that Jobs tops the list of company chiefs with the best buzz in 2009, according to Digital marketing agency Zeta Interactive, which mined millions of blogs, message boards, and social media posts for conversations referencing Fortune 500 CEOs, then used algorithms to measure both the volume and tone of the chatter.

Online posts about the Apple chief totaled 16,218, more than any other CEO; and his 93% positive rating -- the percentage of comments about him that are deemed positive in tone -- puts him a full 10% above the next contender, Yahoo's Carol Bartz.

Speculation about Jobs' ongoing health problems fueled much of the conversation, but the leader named Fortune's CEO of the Decade was also widely praised, with the words "genius" and "inspirational" as two of the most common descriptors.

Paste this link into your favorite RSS desktop reader
See all CNNMoney.com RSS FEEDS (close)
How it was done: Zeta's technology mines the online media landscape -- including millions of blogs, message boards, and social media posts -- and then uses algorithms to measure both the volume and tone of conversations about a given subject -- in this case, the CEOs of Fortune 500 companies. Rankings are based on the percentage of total chatter about a given CEO that is qualified as positive.
More from Fortune
• Dumbest moments in business 2009
• Dumbest moments of the decade
• My sins (and good deeds) of 2009
More Galleries