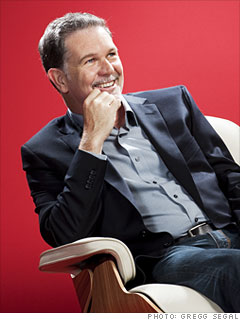 • Reed Hastings: Leader of the pack
•

Cannibalization is something that is much talked about in business, but rarely practiced. At Netflix, it's being streamed daily. This year Reed Hastings has thrown his company's muscle behind delivering television and movies over the Internet, risking his $2-billion-in-sales DVD-by-mail business. The result: a company that has grown from a gnat to a giant. His catalog is expanding -- this summer Netflix got streaming rights to movies from Paramount, MGM, and Lionsgate -- as are subscribers (up 5 million in the U.S., while cable companies are seeing net defections). Already his software is a must-have for the 200-plus device makers who want to brag about having Netflix inside. Now when deals are made in media, the increasingly important question is, "What's the Netflix piece?" In the fall Netflix began its push outside the U.S. (hello, Canada!), and the rest of the world awaits the Netflix treatment from Hastings. Against a backdrop of soaring revenue and customers, international expansion, and the bankruptcy of bitter rival Blockbuster, Netflix stock has gone supersonic since January, rising more than 200%. Hastings used to be an interesting entrepreneur with an uncertain future. Now it's clear the kid definitely stays in the picture.

NEXT: 2. Alan Mulally
Last updated November 19 2010: 10:47 AM ET
More from Fortune
Reader's Choice
After a month of rabid online voting you crowned your own Businessperson of the Year. More
Reed Hastings: Leader of the pack
Executives from Silicon Valley to Hollywood to Wall Street admires his savvy persistence - and his company's cool culture. The secret to the Netflix CEO's success? He never stops looking over his shoulder. More
When they were young
Michael Dell was 21 when he first appeared in Fortune. Bill Gates made the cover when he was 30. Here's a look back at some of today's biggest business leaders when they were climbing the corporate ladder. More