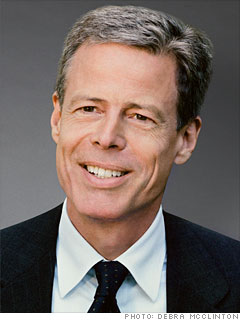 Having finally shed the millstone that was AOL, Time Warner can concentrate on doing what it does best: producing quality television programming, magazines (including Fortune), and motion pictures. In television, the media giant's biggest revenue generator, advertising subscriptions to its pay TV channels, are on the rise, thanks to a viewing audience that stayed home during the recession and watched more TV. Bewkes intends to increase that viewership via his "TV Everywhere" philosophy, i.e., leveraging new digital platforms to get programming wherever watchers want it.

NEXT: 28. Howard Schultz
Last updated November 19 2010: 10:47 AM ET
More from Fortune
Reader's Choice
After a month of rabid online voting you crowned your own Businessperson of the Year. More
Reed Hastings: Leader of the pack
Executives from Silicon Valley to Hollywood to Wall Street admires his savvy persistence - and his company's cool culture. The secret to the Netflix CEO's success? He never stops looking over his shoulder. More
When they were young
Michael Dell was 21 when he first appeared in Fortune. Bill Gates made the cover when he was 30. Here's a look back at some of today's biggest business leaders when they were climbing the corporate ladder. More