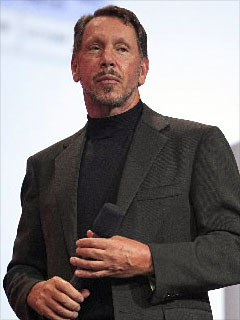 At 66, Ellison showed he still loves a good fight. He took on the HP board, declaring that CEO Mark Hurd's ouster was "the worst personnel decision" since Apple fired Jobs. Then he dug through Sun's IP library and claimed that Google's red-hot Android platform infringed on Java patents. When he hired Hurd as president, his domination of the headlines was complete. His business is doing well too: $12 billion in cash, $1.9 billion in operating income. And the acquisitions seem to be starting again. In November he announced plans to buy Art Technology Group for $1 billion.

NEXT: 8. Warren Buffett
Last updated November 19 2010: 10:47 AM ET
More from Fortune
Reader's Choice
After a month of rabid online voting you crowned your own Businessperson of the Year. More
Reed Hastings: Leader of the pack
Executives from Silicon Valley to Hollywood to Wall Street admires his savvy persistence - and his company's cool culture. The secret to the Netflix CEO's success? He never stops looking over his shoulder. More
When they were young
Michael Dell was 21 when he first appeared in Fortune. Bill Gates made the cover when he was 30. Here's a look back at some of today's biggest business leaders when they were climbing the corporate ladder. More