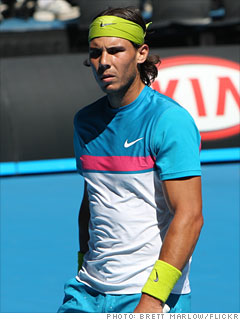 • Ted Forstmann's bad bet
Nadal, the 24-year-old Spaniard and Federer foil, is no slouch either. In fact, in June 2010, Nadal regained the #1 ATP ranking by winning the French Open (the tournament he also won in 2007, when Forstmann bet on Federer). In tournament play, Rafa has been called the "King of Clay" (he beat fellow IMG-er Federer 10 times on the tricky surface), and had an 81-match winning streak on clay that came to an end in 2007.

Nadal is represented by Nike (he has made those Capri pants a trademark), and also has endorsement deals with Lanvin, Kia Motors, Quely, and Armani (jeans and underwear). He helped develop a special watch for Richard Mille, which he tested during play and was valued around $500K (IMG colleague Tiger Woods, meanwhile, advertised for Tag Heuer).

NEXT: Maria Sharapova
Last updated February 15 2011: 5:20 AM ET
More from Fortune.com
Ted Forstmann's bad bet
Allegations of sports betting and more have cast a pall on the buyout king's comeback. True or not, it doesn't look good. More
Was my sports bet legal?
From March Madness to online poker -- what's legal and what's not in the world of sports betting. More