You better believe it -- the real estate market is back. It's time to buy again, and here are the 10 cities with the most affordable homes, according to a new report from Deutsche Bank. 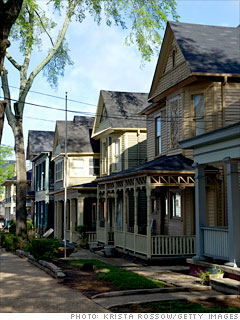 • Real estate: It's time to buy again
Rent as % of after tax mortgage payment: 151.2%
Median home price change, 2006-2010: -33.2%
Many of the cities on this list now have the most affordable housing simply because their real estate crashes were so much more pronounced than elsewhere in the nation. The farther the prices fall, the sooner it inevitably becomes more affordable to buy than rent.

Atlanta is no exception. It tops the list with average monthly rent of about 50% more than the average after-tax mortgage payment. The metropolitan area had the dubious distinction of leading the nation in home construction during most of the decade before the bubble burst. Despite the fact that it now has the most affordable homes in the nation, however, prices continue to slide in Atlanta -- down nearly 14% year-over-year in February. When will those Atlanta renters recognize the clearance sale going on all around them?

(Deutsche Bank's study measures affordability in two ways: the share of income that Americans are paying to own a home, and the cost of owning vs. renting.)
By Daniel Roberts, reporter
NEXT: Orlando
Last updated March 29 2011: 9:31 AM ET
More from Fortune.com
A bright spot in housing's bad market: Rentals
Housing bear David Rosenberg says that apartment REITs should continue their streak for the foreseeable future. More
Five popular tax breaks on the brink of extinction
From energy savings to college costs, Americans are getting a lot of breaks from Uncle Sam during this tax season. But get them while they last -- the good times are about to end. More
How cheap houses spell bad news
Houses look more affordable than ever. But prices will have to fall further before many Americans can actually afford to buy one. More