As NFL owners and players fight over professional football's amazing riches, Fortune and Sports Illustrated teamed up to crunch the numbers for an unprecedented look at the game's GFP (gross football product). 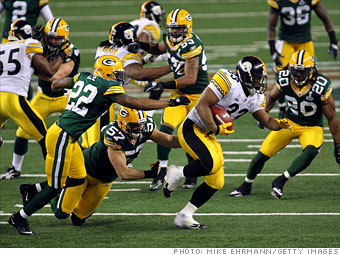 Just how lucrative is the NFL? While the league won't divulge exactly how its $9.3 billion pie breaks down (a sticking point in the ongoing labor talks), that figure is roughly equivalent to the GDP of Macedonia, and slightly more than eBay's 2010 revenues.

For a further sense of its vastness, consider that the GFP is not much smaller than the estimated revenues of major league baseball ($6 billion to $7 billion), the NBA ($3 billion to $4 billion), and the NHL ($1 billion) combined.

Here are some of the major drivers behind the booming football economy.

By Doris Burke, Brian Hendrickson and Daniel Roberts
NEXT: Broadcast
Last updated March 09 2011: 12:45 PM ET
More from Fortune
The biggest losers in an NFL lockout? Everyone.
Who loses first, and worst, if a dreaded NFL lockout really happens? Rookies (sorry, Cam Newton), advertisers, marketers, and maybe the networks. No one is safe. More
Tiger, Peyton and 10 more star clients of IMG
IMG head Ted Forstmann may have made some bad bets (one of the biggest was on IMG's own client), but his company's golden reputation as a sports, modeling, and entertainment agency he resurrected will continue. Here are 12 reasons why. More
Steve Young: From the NFL to private equity
The private equity world is littered with folks who are famous for doing something else. Bono at Elevation Partners. Bill Frist at Cressey & Co. Mike Richter at Environmental Capital Partners. Colin Powell at Kleiner Perkins. More