Fortune 500 CEOs: Where did they go to B-school?

Some 42 of Fortune 100 CEOs have an MBA or master's degree in finance or economics. Which business schools are most popular among the top corporate chieftain crowd? 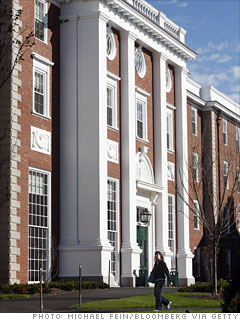 • NEW! Fortune 500+: Your tool for getting inside America's biggest companies

HBS upholds its reputation as the Cathedral of Capitalism, with eight Fortune 100 chief executives, more than any other business school. Two of them -- Jeffrey Immelt and Jamie Dimon -- were even classmates at Harvard (class of 1982).

Together, the eight corporate chieftains employ more than one million people and run companies with a total market capitalization of $550 billion, a sum that exceeds the gross domestic product (GDP) of Switzerland.

By John A. Byrne, Poets&Quants
NEXT: Columbia Business School
Last updated May 05 2011: 2:50 PM ET
2011 Fortune 500
Top 50
Wal-Mart holds Exxon Mobil at bay and rules the Fortune 500 for the second year in a row. Which other companies made the top 50? More
They're hiring!
These Fortune 100 employers have at least 350 openings each, totaling more than 96,000 jobs. What are they looking for in a new hire? More