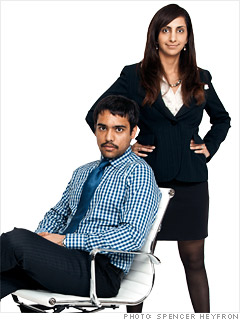 Too much trash. Not enough energy. These are the problems Priyanka Bakaya aims to solve with her clean-tech company PK Clean. You can't accuse her of being an underachiever.

Following a stint as an energy analyst at Lehman Bros., Bakaya discovered a waste-to-fuel technology invented by fellow Australian Percy Kean. After Kean passed away in 2007, Bakaya continued his work. She spent last summer in Pune, India, setting up a pilot plant that, when fully operational, could convert 20 tons of plastic waste into 80 barrels of fuel per day.

While in India, she crossed paths with Arjun Gupta. He was also there working with early-stage energy companies and was pursuing an engineering master's at MIT, where Bakaya was working on her MBA. Gupta joined PK Clean a few months later.

Now Bakaya is seeking a $4 million investment to deploy the technology in the U.S. PK Clean will need to endure a lengthy permitting process before breaking ground. Still, Bakaya believes she'll see a plant on American soil that can process 100 tons of plastic per day by 2014.

Judge's comment: "The fact that they have a pilot plant in India is critical. The key question is whether they can do what they say on a larger scale."