A tiny porpoise finds itself in a battle for survival against the forces of fish mafias, drug cartels, and a Chinese black market.

When US border agents raided the home of Song Shen Zhen, they found a puzzling scene: Hundreds of fish bladders lining his living room floor, drying under fans.

Zhen, a 75-year-old Chinese man, had been tailed by officials after raising red flags at the US-Mexico border in Calexico, California -- officials noticed the uneven floor mats in his car and discovered bags of wet fish organs.

The town of San Felipe, Mexico is located 120 miles from the US border.

Zhen was handed a one year sentence and ordered to pay a $120,500 fine. His run-in with the law offered authorities a rare glimpse into a complex network of illegal fish trafficking.

The bladders in his home belonged to a highly protected species of fish in Mexico, the totoaba, and were worth more than $3.6 million. Today, they're valued at up to $250,000 each on the black market and have sparked a gold rush that's brought a small town -- and a species of tiny porpoise -- to the brink of extinction.

Everyone wants to catch a totoaba.

This story, like so many involving global trade, starts in China.

There is a big market for the totoaba fish in China -- a demand that can be traced back to traditional Chinese medicine. Dried fish bladders are believed to be aphrodisiacs and have various health benefits. The Mexican totoaba, a fish similar to a sea bass, has a large bladder that is highly coveted among Chinese elite.

And the totoaba can be found only in a small area of ocean in Mexico’s Sea of Cortez, near the town of San Felipe, 120 miles south of the US border.

High demand for a commodity often breeds corruption. That’s what demand for the totoaba did in San Felipe.

That corruption was exposed one morning in 2014. Samuel Gallardo was taking a stroll with his family along the shore near San Felipe, when someone in a passing vehicle shot and killed him. Neighbors and local fishermen later revealed that that Gallardo had been well-connected in the powerful Sinaloa cartel.

But Gallardo had started a new venture. He and a handful of locals had been using their know-how in narcotics trafficking to transport totoaba bladders across the US border and eventually to China. Gallardo’s murder signaled the end of the secret. He had tapped into a multi-million dollar business, and now everyone wanted a piece of the action.

After Gallardo’s murder, local fishermen realized they were sitting on a gold mine. On a typical day, fishermen were able to make between $5 and $10 per kilogram (2.2 lbs) of shrimp. A kilogram of totoaba bladder can sell for up to $8,000 in Mexico; a whole bladder can sell for up to $250,000 once it reaches China. Totoaba bladder prices can vary significantly depending on the size, age and quality.

Soon, the totoaba was being harvested by local fisherman and organized crime networks.

Compared to narcotics, a totoaba bladder was a low-risk, high-reward product -- similar in value to cocaine. The totoaba’s protected status made it illegal to fish, but the waters in San Felipe were sparsely patrolled. Authorities at border crossings in Mexico, the US and China had been largely unaware of what a bladder looked like, and for a few years, they flowed freely.

In San Felipe, the influx of money was hard to miss. Fishermen who once earned $500 a month were driving Italian sports cars. Teenagers were making over $20,000 in one night of fishing, and many would flaunt their cash on social media. Bars were packed every night, and a feeling of never-ending wealth filled the streets.

Then everything came crashing down.

The end of the fishing frenzy in San Felipe was blamed on a marine mammal called the vaquita porpoise.

Scientists say it’s one of the world’s smallest marine mammals -- as well as the rarest. As far back as 1997, there were an estimated few hundred individuals living in a small pocket of ocean. It has distinctive black patches around its eyes and a permanent smile on its face.

As more fishermen descended on the waters off San Felipe to scoop up the totoaba, they started inadvertently also catching vaquitas in their nets. The population of the already rare vaquita was being obliterated by the totoaba trade. According to CIRVA, an international committee tasked with monitoring the vaquita population, fewer than 30 remained by mid-2017. The vaquita was on the verge of extinction.

Thus began a global effort to save the vaquita. Environmental organizations and the Mexican military arrived in San Felipe.

In 2015, the Mexican government banned the use of most fishing nets in the area -- effectively closing the ocean for business. Overnight, an entire fishing community found itself without a job. A government compensation program began, and fishermen were paid around $500 a month to stay ashore. For many, the stipend proved too little. 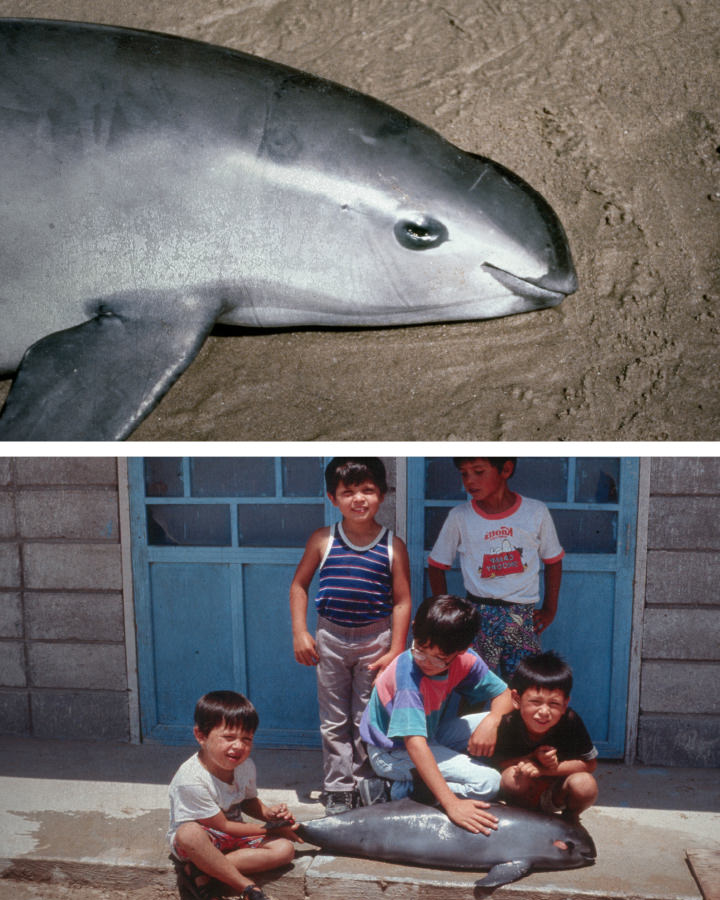 For generations, vaquitas have been accidentally trapped in nets used by fishermen in the region. Courtesy of: Omar Vidal, Alejandro Robles, Caterina D’Agrosa.

“I have a family of three kids, my wife, and we’re barely making ends meet. And some have it a lot rougher. What are we supposed to do: Die of hunger?” says Luis Rivas, a local fisherman.

For the bulk of San Felipe’s population there’s very little work outside of fishing, and many have packed up and left altogether. Today, parts of San Felipe resemble a ghost town.

What are we supposed to do: die of hunger?”

A large number of fishermen who remain are working in the black market centered on the totoaba.

Over two years ago, heavily armed government soldiers were posted at every corner of town, a common site now. They’re here to scare poachers from going out to sea. But poachers are undeterred. The promise of illegal gains are thought to be worth the risk.

“I made $116,000 in one single night of fishing,” says Poncho Rubio, who has fished for totoaba in the past.

Rubio, who now does some mechanical work in town, explains how the illegal fishing trade works: At night, “all-terrain vehicles drive onto remote beaches and launch boats into the surf. Small crews go out, while others post up in nearby hills, keeping an eye for Navy ships, and a close ear on law enforcement's radio frequencies.”

Fishermen, using GPS coordinates, locate undersea nets they have hidden. When a totoaba is caught, the fishermen slice the fish open and remove its bladder, storing it in coolers inside the boat’s secret compartments. Poncho recalls the time his crew was in a high-speed boat chase while running from the Navy. “The adrenaline is high. But everyone wants to catch a totoaba.”

The bladders are taken back to land and handed off to a middleman. Cash is exchanged and the bladders are transported for processing, hidden between car tires and floor boards, and sometimes carried in backpacks on dirt bikes across the desert, to avoid military checkpoints.

An in-depth report released by the Center for Advanced Defense Studies (C4ADS), a nonprofit focused on conflict and security issues, points to a drop in bladder seizures at the US-Mexico border after 2013. Officials suspect that traffickers have found more innovative methods of transportation. A number of shell companies in Mexico and the US have been identified as processing facilities, where bladders are dried and prepped for shipment.

There’s little information on what happens when bladders reach China. In the first years of the totoaba boom, bladders were found in dried seafood stores in Hong Kong and mainland China, but have recently become harder to access. Recent evidence suggests that traffickers cater to an exclusive list of wealthy customers who buy bladders as gifts for business partners and powerful government officials.

What remains clear is that illegal fishing for totoaba bladders is fueled by a desperate need. Many fishermen in San Felipe view it as the only way to prosper.

Life in San Felipe revolves around the underground bladder trade. Its reach has permeated almost every level of society. Law-abiding fishermen have been pressured into silence by a growing group of traffickers. Poachers have been arrested in the past, but no high-level traffickers have been prosecuted. Some poachers have been emboldened by the lack of law enforcement in the region and have taken on more aggressive methods of fishing, particularly during daytime.

One evening on the boardwalk last March, a Mexican official pointed to the fleet of boats headed out to sea.

“Those are all totoaba poachers going out. And we all turn a blind eye,” said the official, who asked that his name not be used in this article. The Mexican government has had a good track record in recovering endangered species — seals and gray whales are examples — but this particular situation has been marked by a series of failures.

“The vaquita can’t be saved,” he said. “There’s just too much money at stake.”

The vaquita can’t be saved. There’s too much money at stake.”

Vaquitas continue to drown in nets. In 2017, four dead specimens were found. Recent estimates suggest that the surviving number could have dropped closer to 20.

In October an international team of scientists led a last-ditch effort to find the remaining vaquitas and extract them for captivity. VaquitaCPR used US Navy-trained dolphins to help locate the animals and bring them to safe zones. The group had some success when the first-ever live vaquita was captured and released. But the operation ended in heartbreak when in November, a female vaquita was rescued but died a few hours later. Scientists presume that vaquitas may not be fit to survive in captivity and the operation has since been halted.

Meanwhile, fishermen in town grow anxious. There’s a looming expiration date on the government's compensation program, and there’s no indication that fishing will ever be allowed again.

I think the vaquitas ran into some bad luck.”

According to the nonprofit Environmental Investigation Agency, totoaba bladders in China are currently being bought and stockpiled as long-term investments. Officials suspect that traffickers are waiting for the day when both the vaquita and totoaba become extinct, making bladder prices skyrocket.

People in San Felipe see their disappearing town and take stock of what the gold rush for bladders has left behind. Many are left wondering what the future holds for their small community.

Poncho Rubio, who reminisces about his days fishing for totoaba, is philosophical about it. Without being able to fish legally, he’s barely getting by. “I think the vaquitas ran into some bad luck. But what can you do? That’s life,” Rubio said. “We’re all just passing through. Us and them.”

This story was published on December 7th, 2017