That forgotten parking ticket could come back to haunt you.

Americans across the country are getting scary debt collection letters – threatening arrest, suspension of their driver’s license or garnishment of their wages -- over what sometimes seem like minor offenses.

Many of these letters are from Linebarger Goggan Blair & Sampson, one of the nation’s largest government debt collectors.

The firm is hired by state and local governments to collect everything from property taxes to water bills, and these government agencies have the power to carry out harsh consequences to get debtors to pay up.

Georgia resident Jesse Franklin received this letter, warning him that he could be arrested at any time for an unpaid traffic ticket. Since he hadn’t driven in years and had never been to the part of Cameron County, Texas where the alleged violation occurred, Franklin was scared and confused. 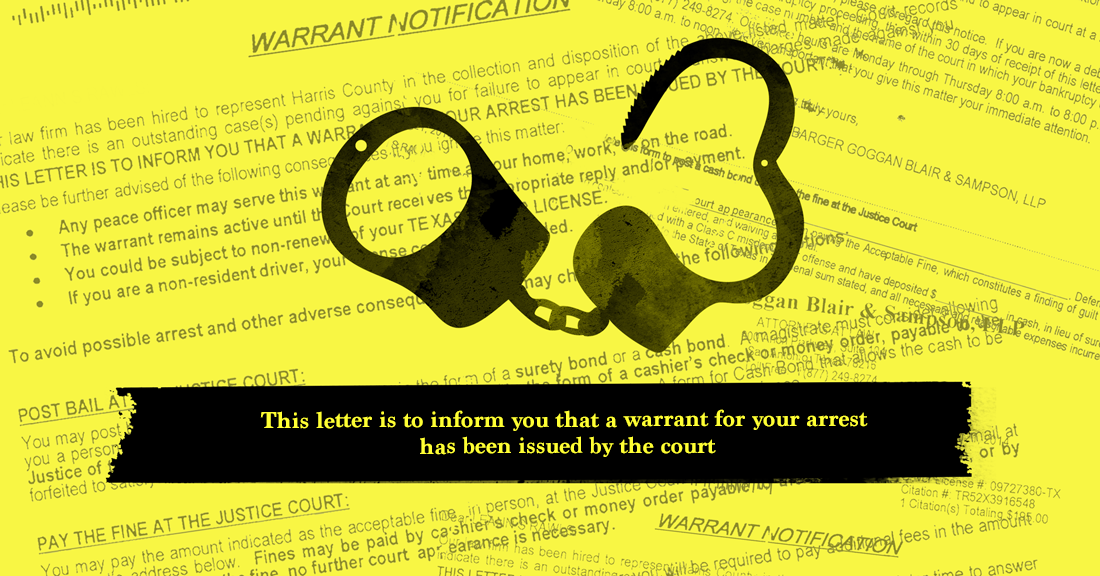 Franklin fought the bill for months, and Linebarger finally stopped coming after him after Cameron County dismissed the ticket. Cameron County court officials did not respond to requests for comment.

Typically, missing a court date is one way a seemingly harmless traffic ticket can turn into an arrest -- or even jail time. And depending on the state, arrest warrants can stem simply from failing to respond to a ticket, which many courts consider a failure to appear. Some courts also say that arrest warrants are simply a way to get people to settle their fine or challenge the violation in court.

But many consumers say they are never notified of their first chance to appear in court, and are suddenly hit with these frightening letters out of nowhere.

Consumer debt collectors – who go after unpaid credit card bills or auto loans, for example -- are barred from misleading consumers with threats and can rarely put someone in jail. Linebarger, however, is empowered to use threats like arrest because the government agencies it works for are allowed to take such extreme actions to get people to pay up.

Critics say this allows the firm to scare consumers into paying their bills, whether or not the amounts they are told they owe are legitimate.

“It brings a certain intensity that most private sector collectors can only dream of being able to employ,” said Alex Kornya, assistant litigation director at Iowa Legal Aid.

In Franklin's case, he received a letter stating that Cameron County had issued the arrest warrant. Linebarger then used that as leverage to try to get him to pay up. While it is in close communication with the agencies it works for, Linebarger told CNNMoney it has no influence on a government’s decision to pursue an arrest or any other action. The firm declined to comment on individual situations, and Cameron County did not respond to a request for comment.

But it will usually tack on a big fee for its services -- up to 40% depending on the state. Debt collectors going after a private debt, like a credit card bill, can typically only charge fees equal to the cost of collecting a specific debt. As a result, private creditors like banks typically have to pay collectors out of the money recovered.

Yet due to certain state and federal laws, Linebarger and other government debt collectors can often slap on much higher fees -- resulting in inflated bills that can easily trap consumers in cycles of debt.

What started as a $100 speeding ticket grew to $2,200 once penalties, court costs, jail fees of $35 a night and Linebarger’s collection fees were tacked on.

With little money and no home of his own, Jackson landed in jail multiple times for being in contempt of court. The 48-year-old said he had failed to appear at his court hearings because he couldn’t afford to pay the steep fines that Linebarger and the government were seeking.

“The amount of fines were so staggering that I did nothing, for fear of jail,” said Jackson, who is currently in prison for being unable to pay child support. “It’s illegal to be poor.”

In this letter, Jackson was warned that he had to pay the bill immediately or else face another arrest. 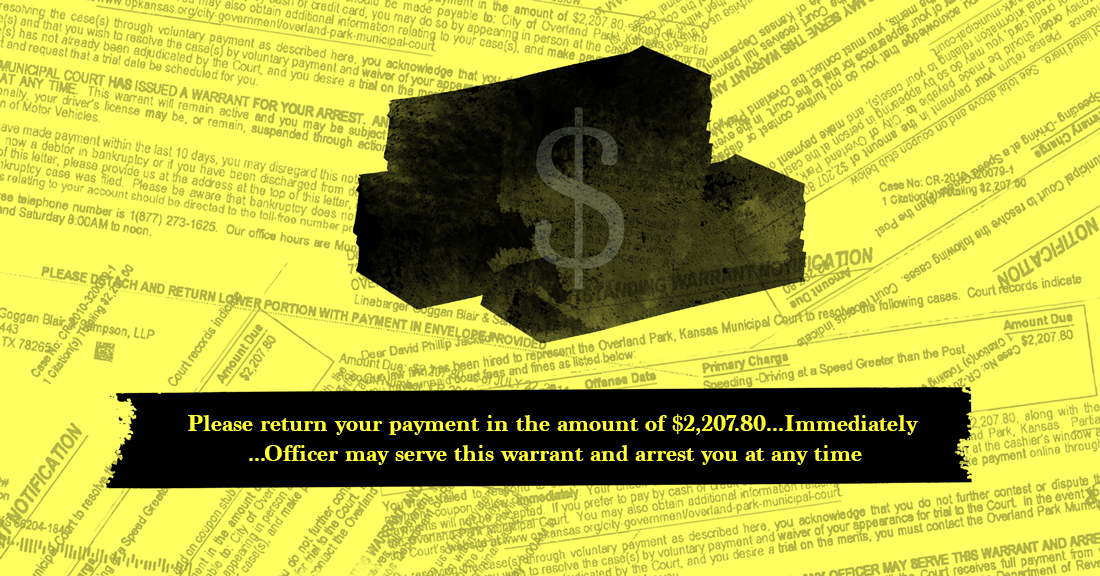 “They don’t have the money and [Linebarger and its government clients] make it ten times worse by just pounding them over the head with fines every chance that they get,” said attorney Tai Vokins, who represented Jackson in an unsuccessful civil rights lawsuit against Linebarger and the city.

Officials from Overland Park said Jackson’s situation was the result of his failure to appear at his hearings, “not the result of his inability to pay a fine.” They said he was given the opportunity to do community service in lieu of jail time, though Vokins said Jackson was unable to due to medical reasons.

To Vokins’ knowledge, Jackson never paid the bill. Overland Park confirmed this, saying it had waived the debt as uncollectable.

In other cases, the government agencies Linebarger works for can take money right out of peoples’ pockets.

Letha Wedel received this letter in 2008, notifying her that 100% of her disposable earnings would be garnished to repay the $11,564 she owed in state taxes and fees. The bill, which her accountant disputed, was for a farm business she used to own with her husband.

Like many states, Kansas law limits wage garnishment for consumer debt. But for tax debts, the courts can garnish up to 100% of disposable wages, meaning all earnings after deductions like taxes or medical insurance. The Kansas Department of Revenue declined to comment on Wedel’s situation and said taxpayers can always request payment plans.

Linebarger says it’s simply doing its job by notifying consumers of actions that governments are taking.

“Wage garnishment is not the preferred course of action, for anyone involved,” said Linebarger partner and chief marketing officer Michael Vallandingham. 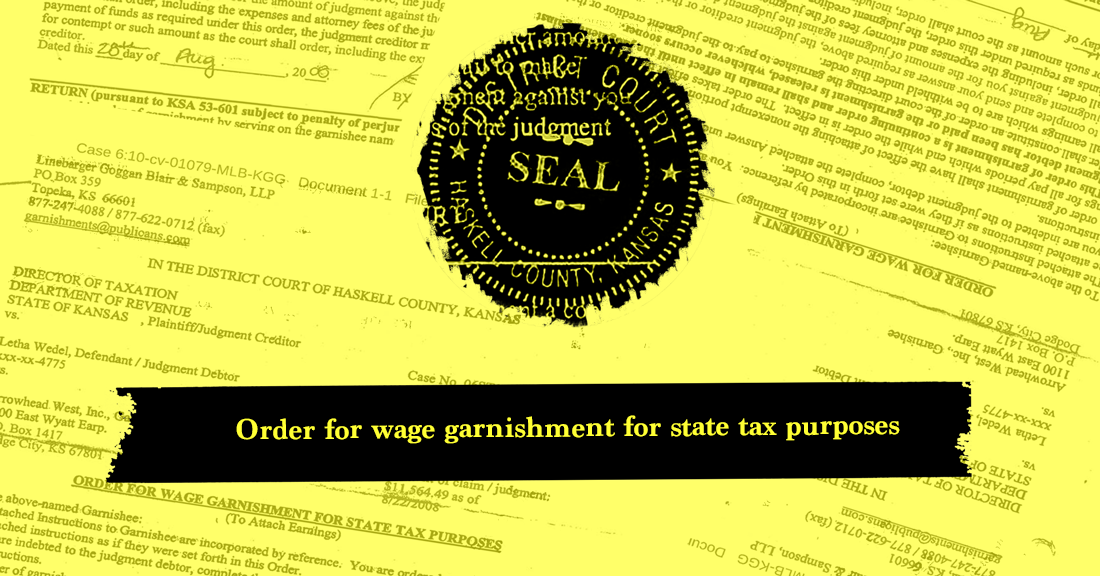 “If you take 100% of all my earnings I have no money to live on. NO money to go to work! Therefore no survival!” Wedel, who is now 68, wrote in a dispute against the garnishment.

At the time she was earning $8 an hour as a job coach for disabled people, according to her husband Gerald. He said it took nearly a year for the government to get its money -- and for Linebarger to get its fees.

Linebarger’s threatening letters also caused Houston military veteran Harry Memnon to worry he would no longer be able to drive to his job as a ROTC instructor after he received the letter below. In one letter, Linebarger warned that Memnon wouldn’t be able to renew his vehicle registration until he paid $287. 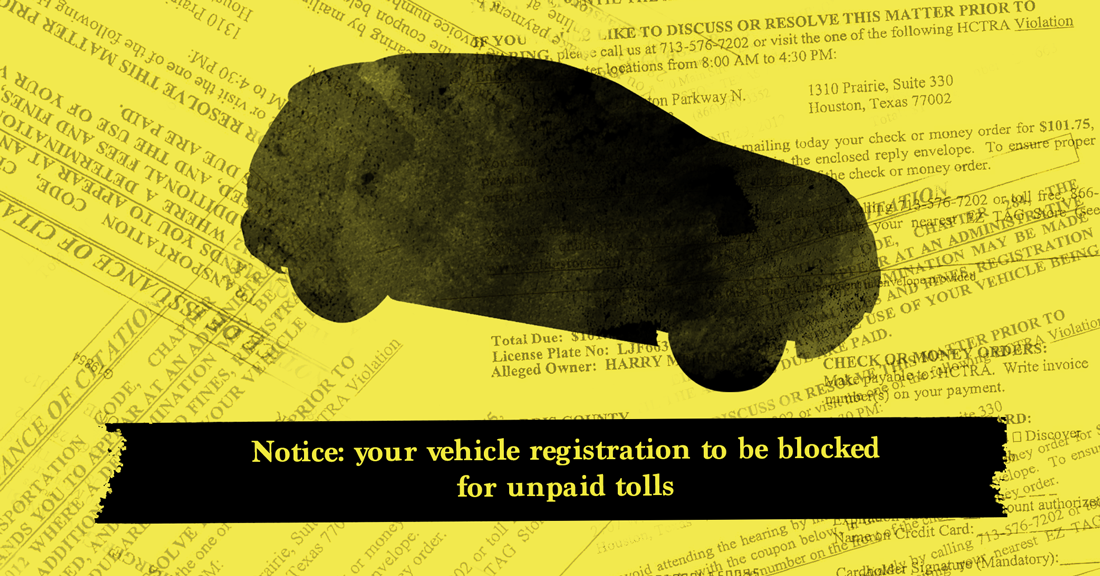 Memnon says he was told that the bill stemmed from $1.25 in toll charges that he didn’t even remember. But Linebarger wouldn’t budge, warning him the debt had to be paid.

“I finally decided enough was enough,” said Memnon. “I just called them and paid.”

Harris County Toll Road Authority said it doesn't send out bills until three toll violations have been incurred, and that it notifies people of their outstanding charges before handing over the debt to Linebarger. The agency wouldn't comment on Harry's specific situation, and Linebarger said that toll violators are given multiple opportunities to pay before the debt escalate.